September was a negative month for most equity and fixed income markets around the world.  Not a huge surprise as September is, on average a down month, fortunately the fourth quarter is historically the best quarter of the year. 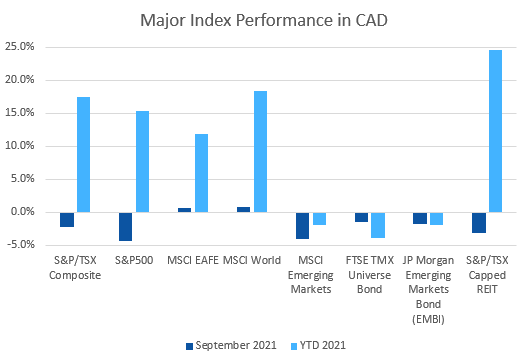 September was a negative month for most equity and fixed income markets around the world.  Not a huge surprise as September is on average a down month, fortunately the fourth quarter is historically the best quarter of the year.

The broad index of EAFE (Europe, Australasia & Far East) stocks was one of the better performers, declining less than -2% in September, while European stocks specifically declined -3.1%.  Both are still up more than +12% for 2021.  Japanese stocks were the top performers in September, gaining +4.9%, but for 2021 they are one of the worst performers up only +7.3%.  Emerging market stocks were down -3.1%, and have now swung negative for 2021 at -1.0%.

In September, the Canadian Dollar (CAD) lost -1.0% against the US Dollar, bringing it back to where it started the year. Against the Euro, CAD gained +0.7% for the month.

Below are the readings received in September for the major economic indicators: central bank interest rates, inflation, GDP and unemployment. 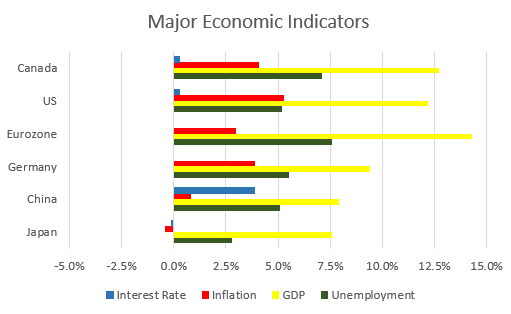 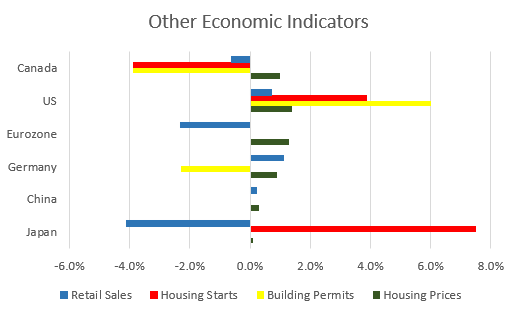 Canada’s unemployment rate dropped to 7.1% in August, the lowest rate since the COVID-19 pandemic began in early 2020, as most regions implemented reopening plans.  The economy gained 90,200 jobs, 68,500 of which were full-time jobs and 21,700 were part-time jobs. Combined with gains seen in June and July, total employment is now only 156,000 jobs away from February 2020 levels.

Housing prices across Canada continued to slow in August, gaining +1.0% vs after several months of gains in excess of +2.0%.  Gains were led by again by Ottawa (+2.1%), followed by Montreal (+2.1%), and Hamilton (+1.7%).  For the sixth consecutive month all 11 major housing markets were positive.

The level of new housing starts declined -3.9% to 260,200 in August, the third straight month of declines.  Urban housing starts declined -4.7%, due to a decline of -5.7% in multi family urban home construction.  One of the main trends in housing during the pandemic as touted in the media, was urbanites leaving places like the GTA (Greater Toronto Area) and moving to much less expensive parts of Canada like the Maritimes.  It seems that housing construction is starting to reflect that.  Building permits issued declined -3.9% in July to $9.9 billion, with seven provinces contributing to the loss. Alberta was the largest decliner at -24.3%, while Ontario declined -10.5%. Alberta also led the declines in the non-residential sector with a decline of -46.9% (!). Canada wide, non-residential construction declined -5.6%

The inflation rate for August was +0.2%, and +4.1% on an annual basis – the highest annual inflation rate since March 2003.  Part of the reason for the higher level of inflation is the lower price levels seen in the midst of the worst of the pandemic in summer 2020.  Most of the increase was attributed to rising gasoline prices. Core inflation which excludes more variable items such as gasoline, natural gas, fruit & vegetables and mortgage interest was +3.5%.

Retail sales were down -0.6% in July, and +5.3% compared to a year ago. Most of the downward pressure came from lower sales at grocery stores as well as building and garden centres. Clothing stores led the gainers, up +7.6%.