Unfortunately December didn’t give us the Santa Claus rally that we were all hoping for, the markets were more of a Nightmare Before Christmas. 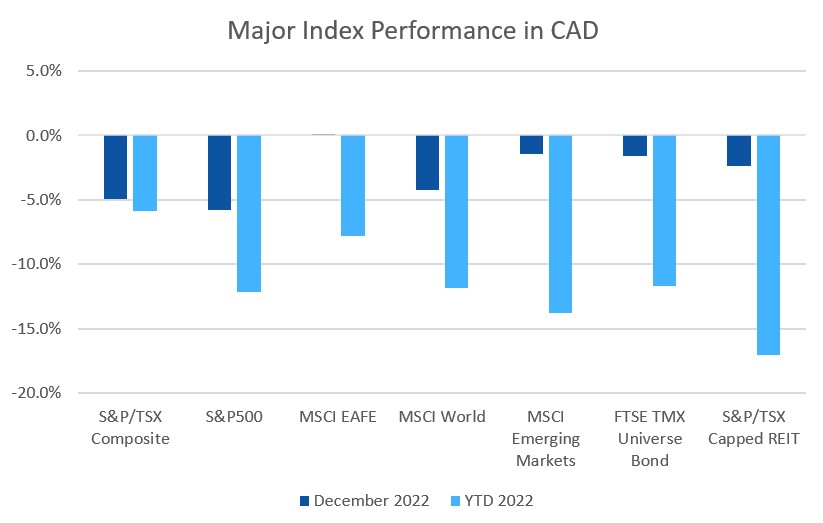 Unfortunately December didn’t give us the Santa Claus rally that we were all hoping for, the markets were more of a Nightmare Before Christmas.

Bonds also performed poorly in December, with both investment grade and high yield posting negative returns in December and for 2022 as a whole.

Below are the readings released in December for the major economic indicators: central bank interest rates, inflation, GDP and unemployment. 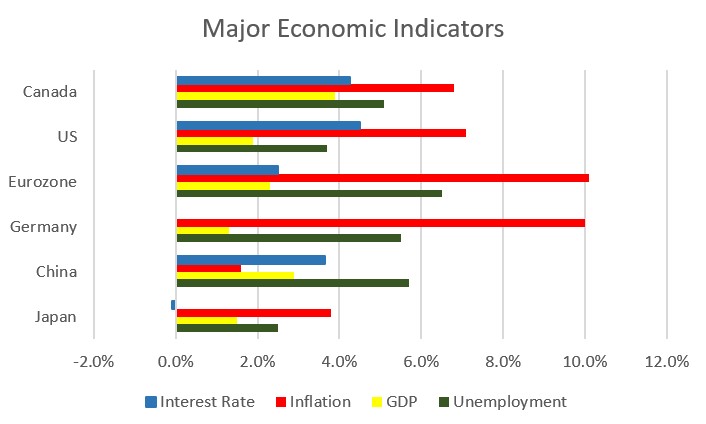 Below are the current readings on the housing market. 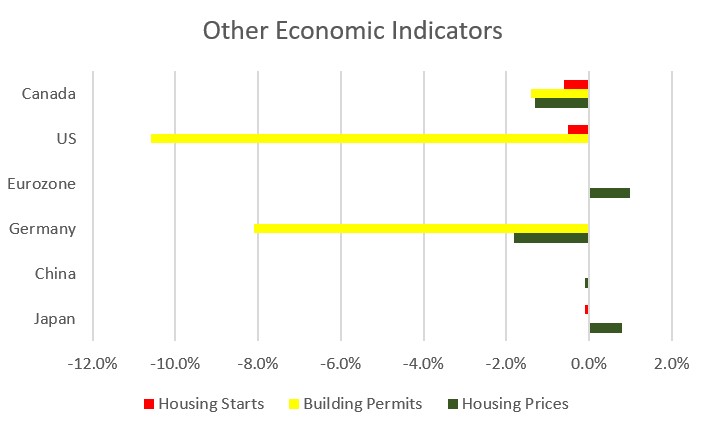 The Canadian labour market remains tight with many businesses seeing difficulty attracting interest in their open positions. Canada’s unemployment rate declined slightly to 5.1% in November with the number of unemployed persons falling by 23,800.  The economy added 10,100 jobs; 50,700 full time jobs were added while 40,600 part time jobs were lost.  At the sector level, gains were seen in financial services, real estate, and manufacturing.

The level of new housing starts declined slightly in November to 264,000, with urban multifamily housing (condos and townhouses) accounting for most of that (190,000).  The value of building permits issued declined -1.4% in October. Residential construction declined -6.4% led by declines in Ontario and Nova Scotia.  Non-residential construction 9.5% with both commercial and industrial sectors posting gains.

The inflation rate for November was +0.1%, and +6.8% on an annual basis; inflation could decline by 2% and still be higher than inflation at any point in the last 25 years.  Transportation costs rose at a slower pace as gasoline prices eased slightly in Alberta and BC. Housing costs also continued to rise as interest rate hikes by the Bank of Canada drove up mortgage costs, while rent increases also continued. Meanwhile, food price increases remained above 10%.  Core inflation which excludes more variable items such as gasoline, natural gas, fruit & vegetables and mortgage interest was +5.8%.  While the Bank of Canada has raised interest rates 7 times so far in 2022, it generally takes at least 12 months for interest rate increases to affect the economy – so don’t expect any major relief in inflation until well into 2023.

Canada’s GDP was up +0.1% in October (the same slight growth for 6 months in a row).  This time the services sectors led the way, as they gained +0.3%, while the goods producing sectors declined -0.7%.

The Bank of Canada raised interest rates by 0.50% again at the December 7 meeting. The benchmark rate now sits at 4.25%, the highest level since 2008. With the labour market remaining tight and inflation remaining high, the BoC is expected to raise interest rates again at the January 25th meeting.