October was a good month for most equity markets, while fixed income and emerging markets were down. REITs had a fantastic month and are on track for their best year in decades. 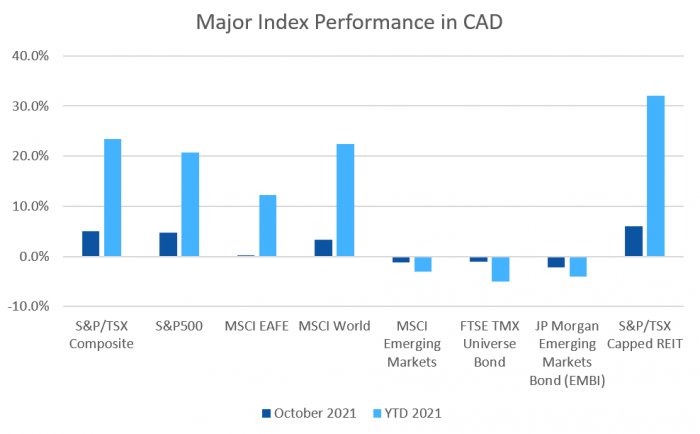 October was a good month for most equity markets around the world, and a down month for most fixed income markets as the possibility of rising interest rates came to the forefront.

Bonds were mostly down in October.  The major Canadian bond index, the FTSE/TMX Universe Bond Index, lost -1.1% in October as did the FTSE/TMX Short-term Bond Index.  Both are negative for 2021; -5.0% for the Universe index and -1.5% for the Short-term index. US investment grade bonds were one of the few positives in the global bond markets in October.  ICE BoA AAA index gained +0.9%, but it’s still down -2.5% for 2021.  The BBB index gained +0.2% for the month, and is now flat for 2021.  High yield had it’s first negative month in over a year, the HY Master II Index was down -0.2%, and -0.4% for the CCC and lower (the real junky stuff) Index.  Emerging market bonds were down -2.1%, bringing the YTD loss to -4.1%. Unless EM bonds have spectacular performance in November and/or December, they will post their first negative year since 2007(!).

REITs rebounded strongly in October, gaining +6.0%, bringing their YTD performance to +32.1%.  Unless the wheels fall off, 2021 will be the best year for REITs since 2009, when they gained +55.2% following the historic losses seen during the 2008 financial crisis.

The Canadian Dollar (CAD) gained strength in October, welcome news for those hoping to travel as international borders start to reopen.  Against the US Dollar CAD gained +2.8%, and +3.1% against the Euro.

Below are the readings received in October for the major economic indicators: central bank interest rates, inflation, GDP and unemployment. 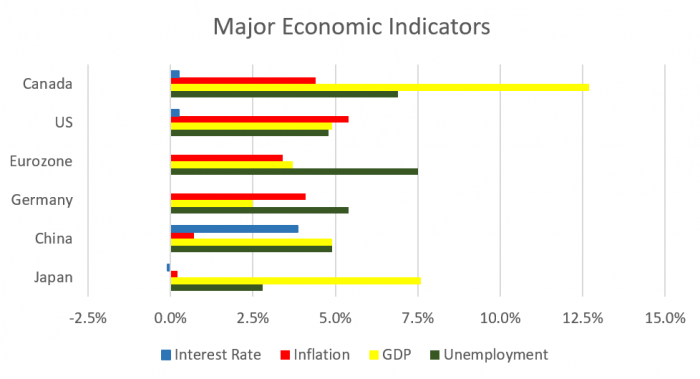 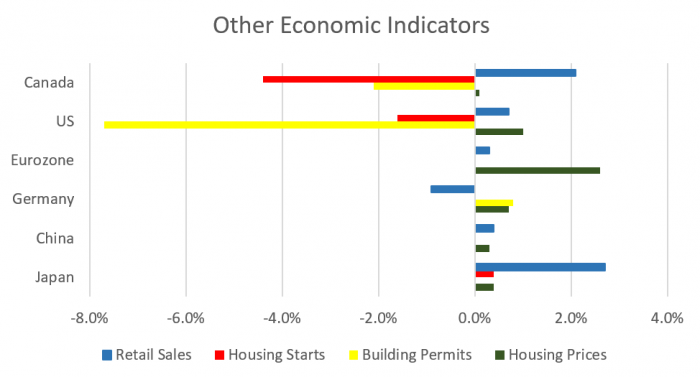 Housing prices across Canada were basically flat in September, gaining only +0.1%.  Gains were led by Winnipeg (+1.0%), followed by Victoria (+0.6%), and Toronto, Quebec City and Halifax all at +0.4%.  Vancouver and Ottawa were the only markets that were down in September.

The inflation rate for September was +0.2%, and +4.4% on an annual basis – the highest annual inflation rate since February 2003.  Part of the reason for the higher level of inflation is the lower price levels seen in the midst of the worst of the pandemic last year, as well as ongoing supply chain issues.  Prices rose in all eight components of the index.  Core inflation which excludes more variable items such as gasoline, natural gas, fruit & vegetables and mortgage interest was +3.5%.

Retail sales were up +2.1% in August, with 9 of 11 sectors posting gains. Sales were up +8.4% compared to a year ago. Most of the gains came from supermarkets and grocery stores, as well as clothing stores and gasoline stations.

As expected, the Bank of Canada left its benchmark interest rate at +0.25% at the October 27th meeting.  The benchmark interest rate is expected to remain at its current low level until into second half of 2022. The big headline is the BoC ended their quantitative easing program of purchasing government and corporate bonds, returning to the pre-pandemic policy of restricting purchases to reinvestment of maturing bonds.