August was the seventh positive month in a row for most equity markets, while bonds were mixed. REITs were once again positive, their eighth consecutive positive month. 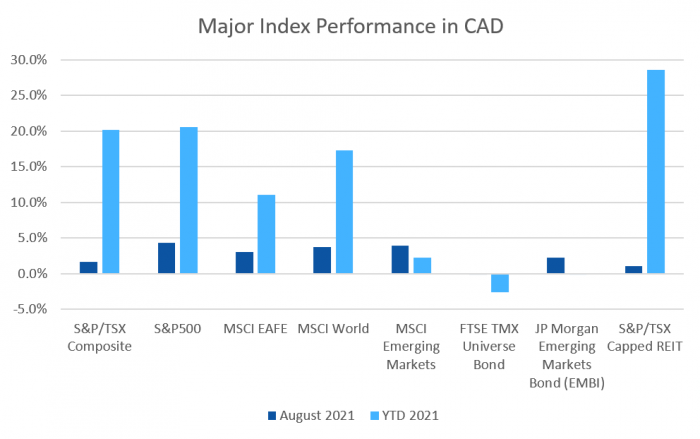 August was the seventh positive month in a row for most equity markets, while bonds were mixed. REITs were once again positive, their eighth consecutive positive month.

Below are the readings received in August for the major economic indicators: central bank interest rates, inflation, GDP and unemployment. 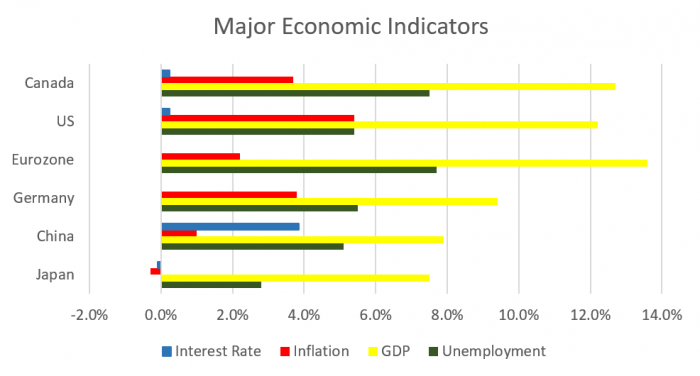 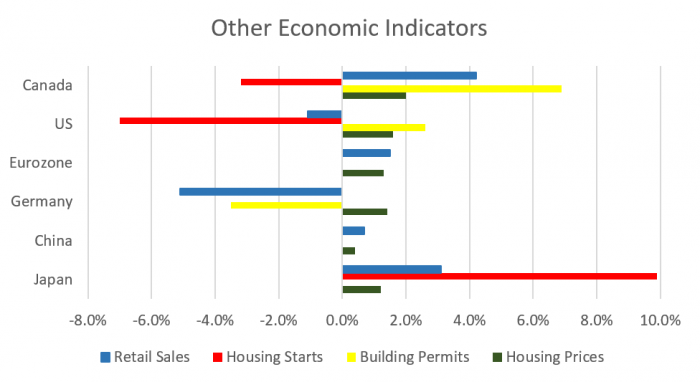 Canada’s unemployment rate dropped to 7.5% in July as most regions substantially eased COVID-19 restrictions.  The economy gained 94,000 jobs, 83,000 of which were full-time jobs and 11,000 were part-time jobs. Interestingly, private sector employment gained 123,000 jobs, while the public sector shrank by 31,000 – perhaps due to closing of vaccination sites as the majority of Canadians received the second dose of the COVID-19 vaccine?

Housing prices across Canada were up +2.0% in July.  The monthly price gains are slowing; June was +2.7% and May was +2.8%.  Gains were led by again by Ottawa (+3.7%), followed by Halifax (+3.0%), and Montreal (+2.5%).  For the fifth consecutive month all 11 major markets were positive.  With the federal election campaign underway, expect the major political parties to announce plans to tackle the housing affordability crisis.  Unfortunately, if they’re all like the Liberals’ plans, don’t expect any price declines in the near future, quite the opposite in fact.

The inflation rate for July was +0.6%, and +3.7% on an annual basis – the highest annual inflation rate since May 2011.  Core inflation which excludes more variable items such as gasoline, natural gas, fruit & vegetables and mortgage interest was +3.3%.  The rise in inflation was attributed mostly to gasoline and housing prices.  Excluding gasoline, the inflation index rose +2.8%.

Canada’s GDP was up +0.7% in June, with 15 of 20 industrial sectors showing expansions as manufacturing and services sectors rebounded.

As expected, the Bank of Canada left its benchmark interest rate at 0.25% at the July 14th meeting.  The benchmark interest rate is expected to remain at its current low level until into second half of 2022. The BoC reduced its quantitative easing program of purchasing government and corporate bonds to $2 billion per week, down from $3 billion.  The next meeting was scheduled for September 8.