November was a down month for most equity markets around the world, while most fixed income indexes posted gains. 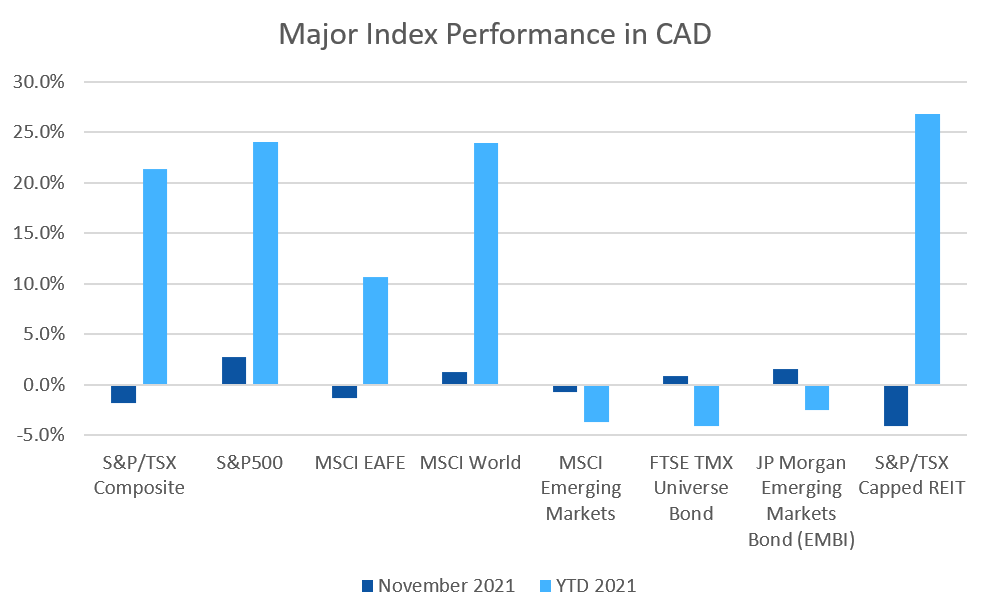 November was a down month for most equity markets around the world, while most fixed income indexes posted gains.

The broad index of EAFE (Europe, Australasia & Far East) stocks declined -2.6% in November, and remain up a little more than +10% for 2021.  European stocks specifically performed about the same, declining -2.5% in November.  Japanese stocks were also down in November, losing -4.7%, basically erasing all of the gains for 2021.  Emerging market stocks were also down, losing -3.3% for the month and -3.5% for 2021 overall.

Bonds were largely positive for November.  The major Canadian bond index, the FTSE/TMX Universe Bond Index, gained +0.9%, breaking a 3 month losing streak. The FTSE/TMX Short-term Bond Index gained +0.2%.  Both remain negative for 2021; -4.1% for the Universe index and -1.3% for the Short-term index. US investment grade bonds were mixed in November; the ICE BoA AAA index gained +0.5%, but its still down -1.9% for 2021.  The BBB index was flat in November and is flat for 2021.  High yield was down again, losing -1.0% in November for the HY Master II Index, and -1.4% for the CCC and lower (the real junky stuff) Index.  Emerging market bonds were up +1.6% for the month, bringing the YTD loss up to -2.5%. Unless EM bonds have spectacular performance in December, they will post their first negative year since 2007(!).

REITs had their second negative month of the year, declining -4.0% in November, knocking their YTD performance down to -26.8%.

With the sharp decline in oil prices, the Canadian Dollar (CAD) did what it always does, declined.  Against the US Dollar CAD gained -3.3%, and +1.1% against the Euro.

Below are the readings received in November for the major economic indicators: central bank interest rates, inflation, GDP and unemployment. 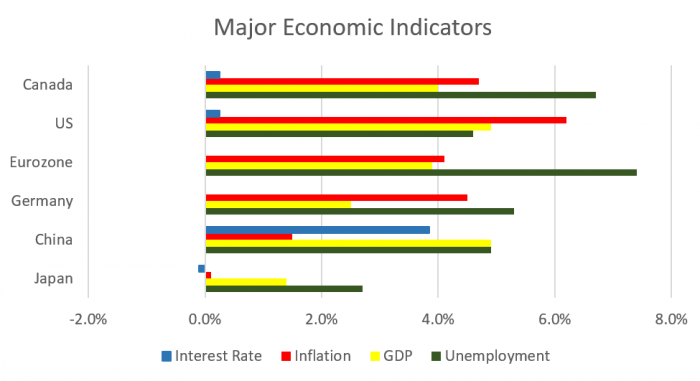 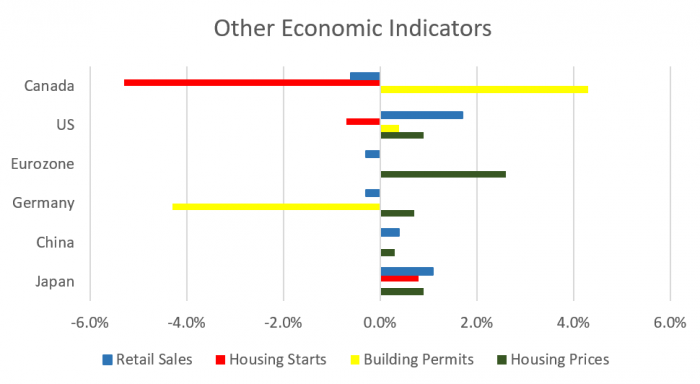 Canada’s unemployment rate declined for the fifth consecutive month, dropping to 6.7% in October, the lowest rate since the COVID-19 pandemic began in early 2020, as most provinces implemented vaccine mandates allowing more non-essential venues to reopen.  The economy gained 31,200 jobs; 36,400 full time jobs were created while 5,200 part time jobs were lost.  Gains were concentrated in the private sector (+70,000), partially offset by declines self-employment (-38,000).

The level of new housing starts declined for the fifth month in a row, losing -5.3% in October to 236,600.  Urban housing starts declined -3.7%, due to a decline of -5.3% in multi family construction.  Single family home construction rose +1.0%.  The value of building permits issued rose +4.3% in September to $10.1 billion. Gains in Ontario was the largest positive contributor to national growth, while Quebec was the largest negative contributor, posting a -8.0% decline.

The inflation rate for October was +0.7%, and +4.7% on an annual basis – the highest annual inflation rate since February 2003.  Part of the reason for the higher level of inflation is the lower price levels seen in the midst of the worst of the pandemic last year, as well as ongoing supply chain issues.  Prices again rose in all eight components of the index.  The largest increases were seen in energy (+25.5%) and transportation (+10.1%). Core inflation which excludes more variable items such as gasoline, natural gas, fruit & vegetables and mortgage interest was +3.8%.

Retail sales were down -0.6% in September, with 7 of 11 sectors posting declines. Sales declined at new car dealers, clothing stores, electronics retailers. Compared to a year ago retail sales were up +4.8%.

Canada’s GDP was up +0.1% in September.  12 of 20 economic sectors saw growth, led by services and oil & gas and mining.  Manufacturing posted a decline largely due to the continued shortage of semiconductor chips.