July was strong month for both equity and fixed income investors alike. 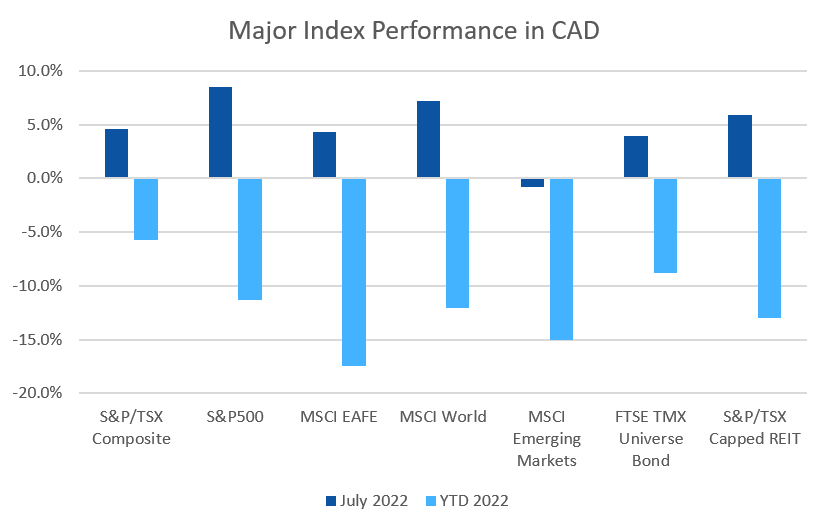 July was strong month for both equity and fixed income investors alike.

The broad index of EAFE stocks (Europe, Australasia & Far East) gained +5.1% in July, trimming the YTD loss to -8.3%.  Out of the EAFE regions, European stocks performed a little better, gaining +6.0% for the month.  Meanwhile British stocks’ gained +3.5%, and Japanese stocks gained +7.1%.  Emerging market stocks were one of the few negative markets in July, losing -0.3%.

The major Canadian bond index, the FTSE/TMX Universe Bond Index gained +3.9% in July, reducing the YTD loss to -8.8%.  The FTSE/TMX Short-term Bond Index gained +1.2% for the month, and is down -3.2% for 2022.  Fortunately, ModernAdvisor has only used short term bonds in the Core and SRI portfolios, helping to mitigate the losses on the bond side of our clients’ accounts. In the US, investment grade bonds and high yield bonds were both positive.  The ICE BoA AAA index gained +3.6% for July, bringing the YTD loss to -12.2%. The BBB index gained +3.0% for the month.  High yield bonds gained +4.1% in July for the HY Master II Index, while the CCC and lower (the real junky stuff) Index gained +6.0%.

For the last few years, our Core and Socially Responsible (SRI) portfolios have had a relatively conservative posture, with our highest risk portfolio (Risk Level 10) having an almost 10% allocation to bonds. This conservative posture was driven by our view that risky assets (i.e. stocks) were trading at a higher-than-average valuation over the past few years.

We have been monitoring the markets for an opportunity to increase the equity portion of ModernAdvisor’s Core and SRI portfolios in line with a neutral strategic asset mix. In Q1 and Q2 of this year, we bought into the stock market weakness, increasing our equity exposure in these portfolios. The highest increase was in our Risk Level 10, which is now 100% equities, compared to approximately 90% equities previously. As a rule of thumb, you can add a zero to the risk level number to determine its strategic equity weight; Risk Level 7 is 70% equity, Risk Level 8 is 80% equity, etc.

In addition to the changes described above, we have continued to monitor the vast majority of client accounts on a daily basis, and have rebalanced them as needed. This rebalancing approach ensures we trim overweight positions, and add to underweight positions systematically. This rebalancing approach adds value to client accounts, especially in choppy markets as we have experienced so far in 2022.

Below are the readings released in July for the major economic indicators: central bank interest rates, inflation, GDP and unemployment. 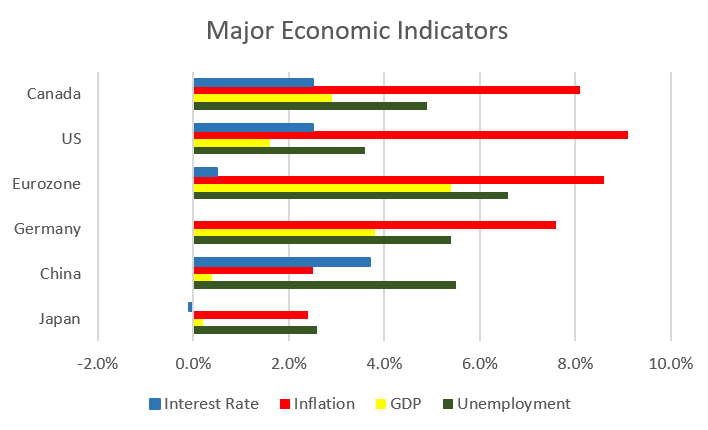 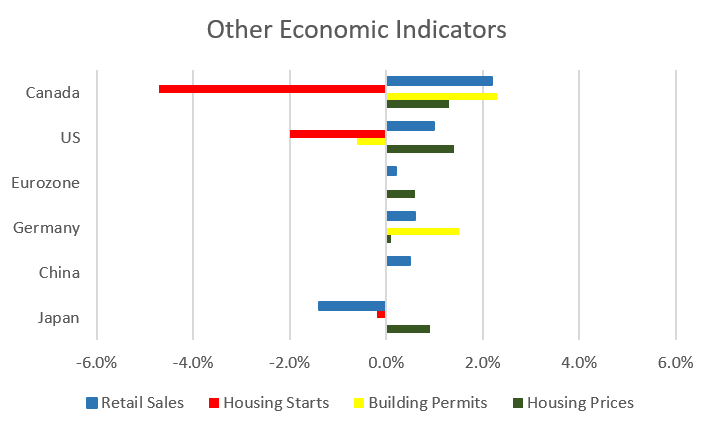 Canada’s unemployment rate dropped to 4.9% in June, a new lowest rate on record since comparable data became available in 1976.  BC, New Brunswick, PEI and Newfoundland also had unemployment rates at or near record lows.  The economy actually lost 43,100 jobs (39,100 part time and 4,000 full time), but as 100,000 people voluntarily exited the workforce, the unemployment rate declined.  This indicates that the economy is near full maximum employment.

The inflation rate for June was +0.7%, and +8.1% on an annual basis – the highest annual inflation rate since January 1983!  Transportation, food, and shelter (aka life!) were the primary drivers of inflation.  Transportation costs surged +16.8% (driven by a 55% rise in gasoline prices).  Food inflation was again +8.8%, and shelter rose +7.1%.  Core inflation which excludes more variable items such as gasoline, natural gas, fruit & vegetables and mortgage interest was +6.2%.

Canada’s GDP was flat in May; 14 of 20 sectors posted gains.  The services sectors grew +0.4%, which was offset by a -1% decline in the goods producing sectors.  Gains in transportation and food services offset declines in construction and manufacturing.

The Bank of Canada increased their benchmark interest rate by a full 1% to 2.5%, the largest increase since 1998, and many analysts were expecting a 0.75% increase. The BoC slashed economic growth forecasts for 2022 and 2023.

In Europe, the ECB raised interest rates to 0.5%, it had been zero percent for over 6 years.