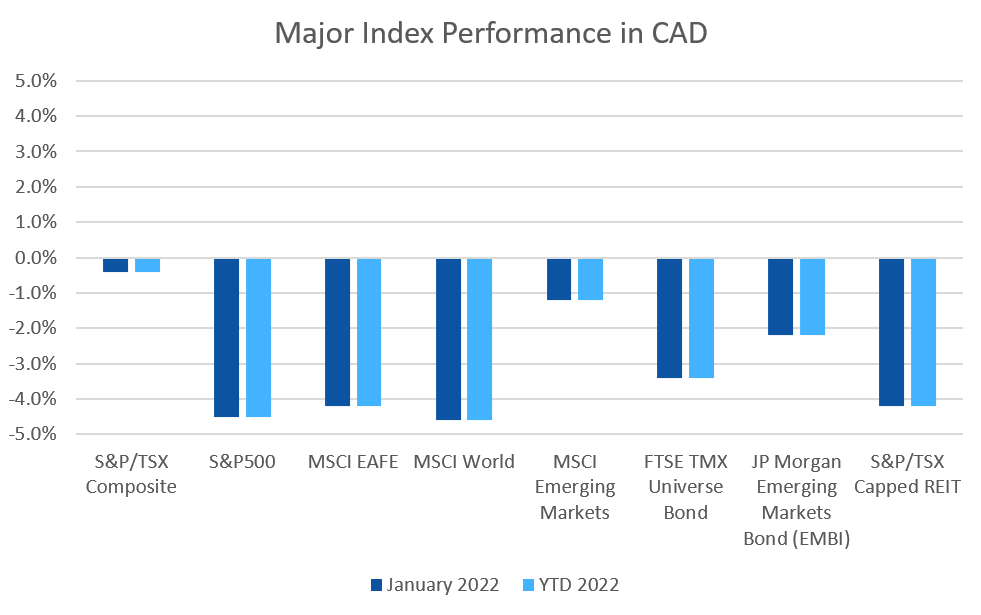 The S&P/TSX Composite declined -0.4% in January, recovering almost all of the losses sustained earlier in the month.  The S&P/TSX Small Cap declined -1.2% for the month. US markets were hit much harder; the large cap S&P500 lost -5.2% (in USD), recovering about half of its losses from earlier in the month. The index of US small cap stocks, the Russell 2000, lost -9.7% and the tech focused Nasdaq lost -9.0% (it was down almost -15% at one point during the month).

The broad index of EAFE (Europe, Australasia & Far East) stocks lost -3.7% in January.  Out of the EAFE regions, European stocks were a little stronger at -3.2%, meanwhile British stocks were actually positive at +1.1%.  Japanese stocks were weaker at -6.2%.  Emerging market stocks were one of the better performers at -1.8%.

Bond markets are beginning to anticipate interest rate increases from the central banks in Canada, the US, UK and Europe, which sent bonds tumbling.  If you have significant exposure in long-term bonds, now would be a good time to start shifting exposure to short-term bonds (under 3 years).  Fortunately, the ModernAdvisor Core and SRI portfolios have been in short-term Canadian bonds for some time.

The major Canadian bond index, the FTSE/TMX Universe Bond Index lost -3.4% in January, its worst month since March 1994(!) when it declined -5.0%. The FTSE/TMX Short-term Bond Index lost ‘only’ -0.9% in January – not a notable amount looking back through its history.  In the US, investors sold the higher grade bonds heavily, while high yield was spared the worst of the losses. US investment grade bonds, like US stocks, were among the worst performers in the fixed income world. The ICE BoA AAA index lost -4.4% for January, their worst month since the 2008 financial crisis. The BBB index performed a little better at -3.2%.  High yield bonds lost -2.7% in January for the HY Master II Index, and -1.9% for the CCC and lower (the real junky stuff) Index.  Emerging market bonds were down -2.2% for January, not terrible in the larger fixed income universe and far from their worst showing for a month.

REITs were also down in January, losing -4.2%, again far from their worst showing.

Oil posted another double digit positive month, gaining +17.2% in January, coming close to US$90 per barrel.  With equity and bond markets not performing well, gold bugs would have hoped that gold would provide some protection, but it too was down in January, losing -1.8%. The diversified Bloomberg Commodities Index gained +8.8% in January, largely on the strength in oil.

In January the Canadian Dollar (CAD) lost -0.3% against the US Dollar.  Against the Euro, CAD gained +0.9% for the month.

Below are the readings received in January for the major economic indicators: central bank interest rates, inflation, GDP and unemployment. 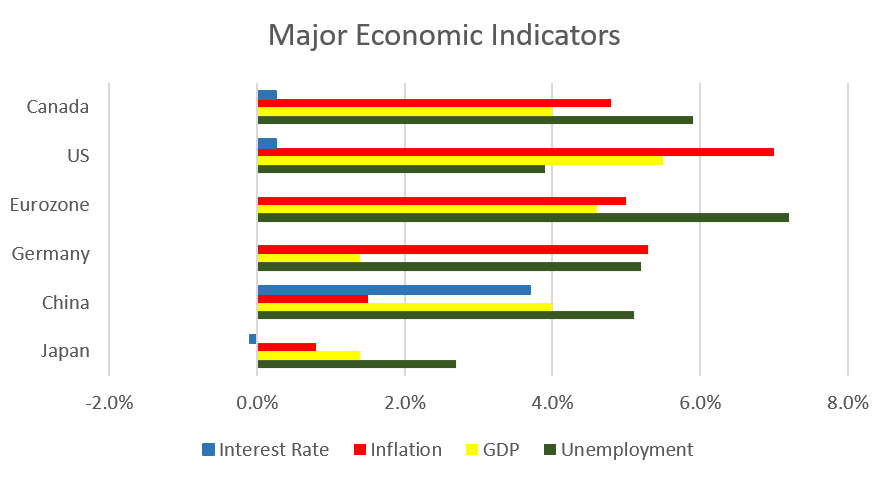 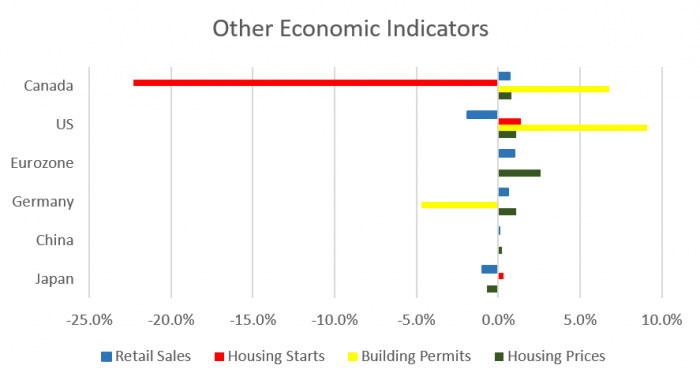 Canada’s unemployment rate declined for the seventh consecutive month, dropping to 5.9% in December, the lowest rate since the COVID-19 pandemic began in early 2020, despite the surge in Omicron cases.  The economy gained 54,800 jobs, double the forecasted amount.  122,500 full time jobs were created, while 67,700 part time jobs were lost.

The level of new housing starts dropped -22.3% to 236,100 units in December, making  November’s strong showing an aberration.  Urban housing starts dropped -24%, driven by multifamily (condo and townhouse) construction.  The value of building permits issued rose +6.8% in November to $11.2 billion, the highest amount on record. This was driven by a 12% rise in residential construction.

The inflation rate for December was -0.1%, and +4.7% on an annual basis – the highest annual inflation rate since February 2003.  Part of the reason for the higher level of inflation is the comparison to lower price levels seen in the midst of the worst of the pandemic last year, as well as ongoing supply chain issues.  Prices again rose in all eight components of the index.  The largest increases were seen in transportation (+8.9%), passenger vehicles (+7.2%) and housing (+5.4%). Core inflation which excludes more variable items such as gasoline, natural gas, fruit & vegetables and mortgage interest was +4.0%.

Canada’s GDP was up +0.6% in November, the sixth consecutive positive month.  17 of 20 economic sectors saw growth, led by manufacturing, agriculture, forestry & fishing, and   accommodation & food services. Mining and oil & gas extraction offset some of the gains.