February was almost a carbon copy of January, albeit a faint copy; almost all equity markets were down as were bond markets. 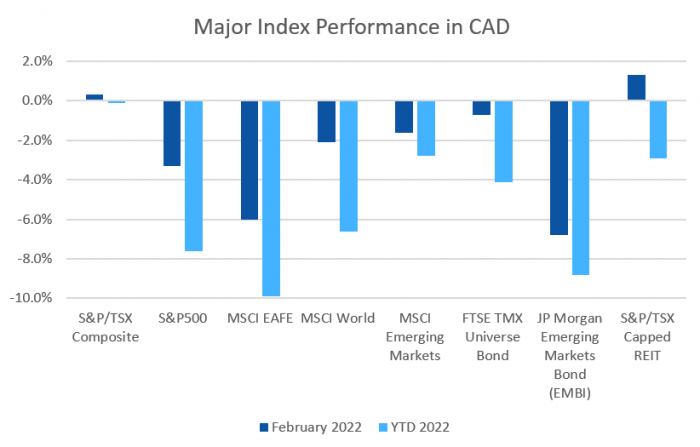 February was almost a carbon copy of January, albeit a faint copy; almost all equity markets were down as were bond markets.

Bond markets are beginning to digest the prospect of higher interest rates, which sent bonds lower.  If you have significant exposure in long-term bonds, now would be a good time to start shifting exposure to short-term bonds (under 3 years).  Fortunately, the ModernAdvisor Core and SRI portfolios have been in short-term Canadian bonds for some time.

The major Canadian bond index, the FTSE/TMX Universe Bond Index lost -0.7% in February, bringing the YTD loss to -4.1%.  The FTSE/TMX Short-term Bond Index lost -0.2% in February.  In the US, investors sold the higher grade bonds heavily again, while high yield was spared the worst of the losses. US investment grade bonds, like US stocks, were among the worst performers in the fixed income world. The ICE BoA AAA index lost -2.1% for February, bringing the YTD loss to -6.2%. The BBB index performed a little worse for the month at -3.4%.  High yield bonds lost -0.9% in February for the HY Master II Index and the CCC and lower (the real junky stuff) Index.  Emerging market bonds were down -6.8% for February, their worst month since the pandemic began in March 2020. For the year, EM bonds are down -8.8% putting them on track for their worst month since the 2007 Asian crisis.

REITs were one of positives in February, gaining +1.3% for the month.

Oil had a strong month, gaining +8.8% in February, nearing the US $100 per barrel level for the first time since July 2014.  Gold gained +6.3% in February. The diversified Bloomberg Commodities Index gained +6.2% in February, largely on the strength in oil.

In February the Canadian Dollar (CAD) gained +0.2 against the US Dollar and the Euro.

Below are the readings received in February for the major economic indicators: central bank interest rates, inflation, GDP and unemployment. 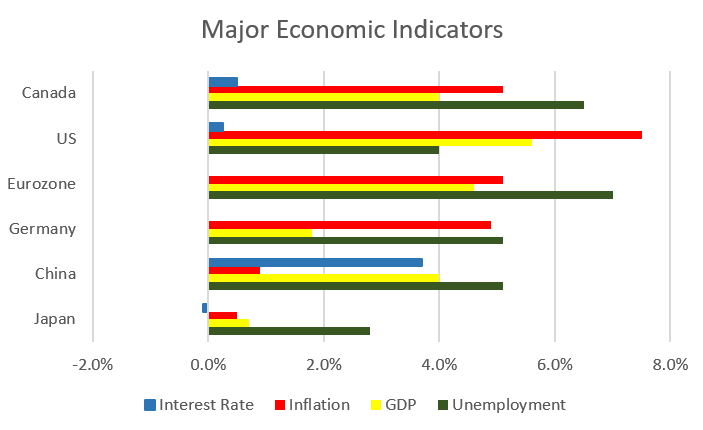 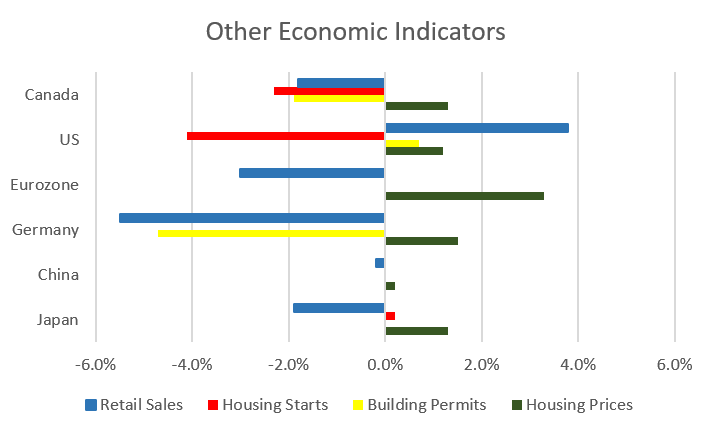 Canada’s unemployment rate rose in January, the first increase in eight months, climbing half a percent to 6.5%.  The economy lost 200,100 jobs, almost double the forecasted drop of 117,000. 83,000 full time jobs were lost, along with 117,100 part time jobs.  The job losses were concentrated in the services sector, with accommodation and food services suffering most.

It seems that the sky high cost of building materials continues to impact new home construction. The level of new housing starts dropped -2.3% to 230,700 units in January.  Urban housing starts dropped -5%, driven by multifamily (condo and townhouse) construction.  The value of building permits issued declined -1.9% in December to $11.2 billion, down from the record of $11.4 billion set in November. This was driven by a -2.7% decline in residential construction.

The inflation rate for January was +0.9%, and +5.1% on an annual basis – the highest annual inflation rate since September 1991!  Pandemic related challenges continue to weigh on supply chains, restricting supply of some products and driving up prices. Energy prices were also a major contributor, as gasoline prices rose +31.7%.  Prices again rose in all eight components of the index.  The largest increases were seen in transportation (+8.2%), food (+5.7%), and housing (+6.2%). Core inflation which excludes more variable items such as gasoline, natural gas, fruit & vegetables and mortgage interest was +4.3%.

Retail sales were down -1.8% in December, with 8 of 11 sectors posting declines. Declines were seen at furniture and home furnishing stores, and clothing stores.  Compared to a year ago retail sales were up +8.6%.

As expected, after months of inflation higher than we’ve seen in more than a decade, the Bank of Canada raised interest rates +0.25% to +0.50% at the March 2nd meeting.  The benchmark interest rate is expected to remain at its current low levels until into second half of 2022. The BoC expects inflation to remain elevated for the first half of 2022, after which they expect inflation to ease, although the invasion of Ukraine and the rapid rise in energy prices creates additional uncertainty for interest rate forecasters.