April was a difficult month for equity markets around the world, while bonds continued to suffer. 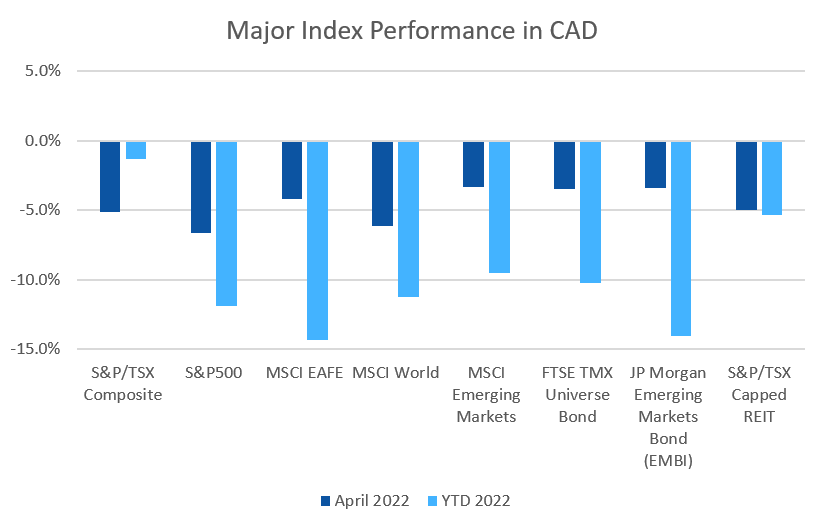 April was a difficult month for equity markets around the world, while bonds continued to suffer.

Bond markets continue to struggle with the prospect of higher interest rates; all indexes we track posted their fourth negative month in a row, with many having their worst start to the year in decades.

Below are the readings received in April for the major economic indicators: central bank interest rates, inflation, GDP and unemployment. 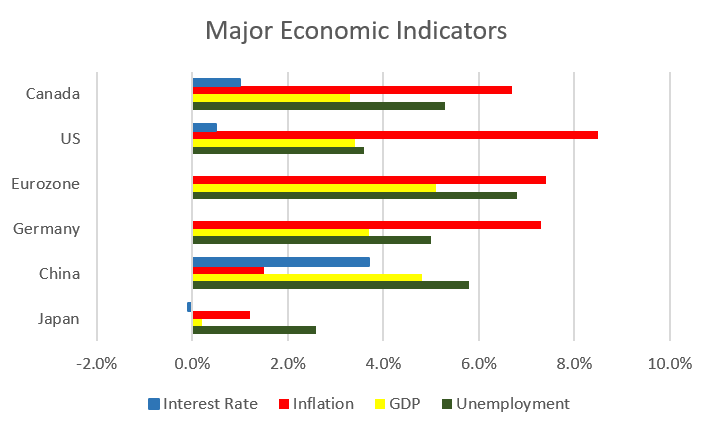 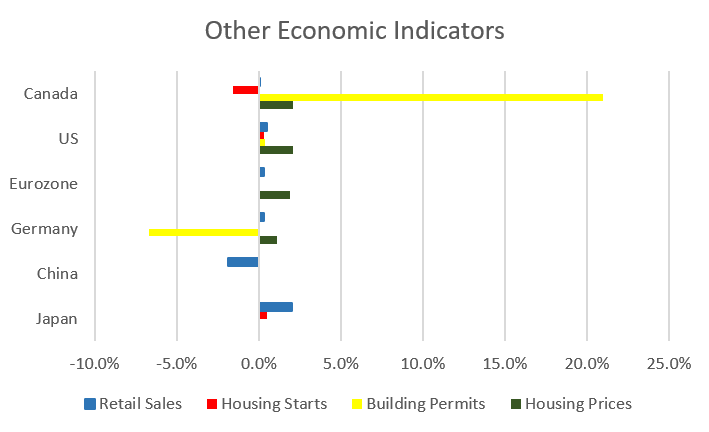 Canada’s unemployment rate dropped to 5.3% in March, the lowest rate on record.  Employment increased in both the goods and services sectors, with gains concentrated in Ontario and Quebec. The economy added 72,500 jobs, 92,700 were full time jobs, while 20,200 part time jobs were lost.  The job gains were concentrated in the services sector, particularly accommodation and food services.

Retail sales were up +0.1% in February, with 6 of 11 sectors posting increases.  Clothing stores saw gains of +15%, and gasoline stations +6.2%. Car dealers were one of the few losers, with sales declining -5.1%. New car dealers, grocery stores and general merchandise stores were the largest gainers.  Compared to a year ago, retail sales were up +7.4%.

As expected, after months of inflation higher than we’ve seen in more than a decade, the Bank of Canada raised interest rates +0.50% to +1.00% at the April 13th meeting.  The BoC hasn’t raised rates by 0.50% in more than 20 years. The benchmark interest rate is expected to remain at its current low levels until into second half of 2022. The BoC expects inflation to remain elevated for the first half of 2022, after which they expect inflation to ease, although the invasion of Ukraine and the rapid rise in energy prices creates additional uncertainty for interest rate forecasters.

The Bank of Canada also announced plans to begin quantitative tightening (the reverse of quantitative easing seen at the start of the pandemic and in the financial crisis) beginning on April 25.  Maturing bonds will no longer be replaced with new purchases, which will shrink the size of the Bank’s balance sheet.  This will in effect remove a large bond buyer from the market and increase the yields seen on longer term bonds.