Voters in the UK put stock markets into a bit of a tumble after they narrowly voted to leave the EU.  North American stock markets fared better and recovered their losses by the end of the month.  The biggest loser was the British Pound which hit a 31 year low just after the vote and has continued to drop.

The stock markets were fairly calm for most of the month, up until the people of the UK decided they no longer wanted to be part of the European Union.  Polls in the final week leading up to the vote had swung in favour of Remain so the markets were not expecting the result to be Leave.  European and Asian stock markets reacted very negatively when they opened, and currency markets also went on a wild ride.  North American markets performed better and have fully recovered from the Brexit shock.

The S&P/TSX Composite Index was flat for the month, but is up +8.1% for the year.  This is way ahead of how most of the stock markets around the world have performed so far 2016.  With oil recovering and gold rising strongly in the last few months, Canadian small caps have performed strongly and are up 26.4% so far in 2016.  European markets were mostly negative as expected, except for the FTSE 100 (the UK’s large cap stock market index, similar to the S&P/TSX 60 in Canada) which was up 4.4% for June.  Japanese stocks had a terrible month, down -9.6%, doubling its YTD loss to -18.2%.

With all of the uncertainty at the end of the month, money flowed into safe haven currencies, which the Canadian Dollar is usually not.  However, against the US Dollar, the Loonie strengthened 1.5% to 1.2917, and against the Euro it rose 1.8% to 1.4331.

The people of the United Kingdom voted narrowly in favour of leaving the European Union (EU).  The UK is a union of 4 countries; England and Wales voted to leave the EU, while Scotland and Northern Ireland voted to remain in the EU.  This immediately led to talk of Scotland holding another referendum to separate from the UK, and Northern Ireland possibly reuniting with the rest of Ireland. 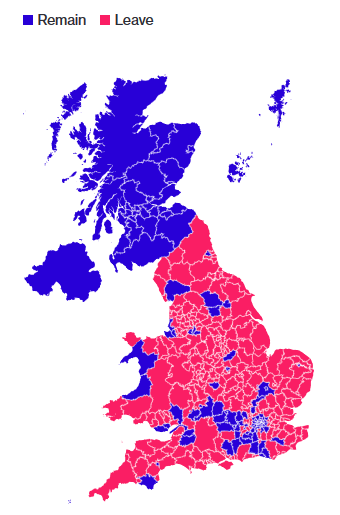 On a more positive note, there is the possibility that of some of the countries which form the UK could remain in the EU without having to break up the UK.  The Kingdom of Denmark is a union of 3 countries (Denmark, Greenland and Faroe Islands), but only Denmark itself is part of the EU.  The UK could possibly do the same.

With financial markets largely expecting the UK to vote to remain in the EU, the results caused a bit of a panic.  The British Pound dropped sharply to multi-decade lows, dragging stock markets along with it.  Traditional safe havens like the US Dollar, US treasuries and gold benefited.  North American stock markets were less impacted than European ones.

With so many questions surrounding the Brexit, it is unlikely that stock and currency markets will see much in the way of a lasting calm over the next few months.  If the UK does actually move forward with leaving the EU, negotiations will likely take years to conclude.  It is likely that there will be many surprises along the way for markets to get excited about, both good and bad, during that time.

Financial markets have a way of overreacting to news like this.  In many cases this creates buying opportunities for those with the stomach to put money to work while there is this level of uncertainty in Europe.  Those who bought when things looked darkest on Friday were rewarded a few days later when markets recovered strongly.  This was a good reminder that long term investors (which should be any one who is invested in the stock market) should do nothing when the markets take a dive – unless you have some cash to invest!

The End of Trailer Fees?

Closer to home, the big news came from the Canadian Securities Administrators (an association of the provincial and territorial securities commissions) announcing that they would be seeking comment on their proposal to end the practice of mutual fund trailer fees.

Mutual fund trailer fees have long been a blight on the investment industry in Canada.  Many investors are blissfully unaware of what they are paying for the mutual funds in their accounts, let alone how their advisors are compensated.  In many cases the dealer that an advisor works for, or is associated with, receives a fee from the mutual fund company of 0.50% to 1.00% of the assets their clients have invested.  This is part of the MER of the mutual fund, so it comes directly out of the fund and does not appear on client account statements (yet).

Banning these trailer fees would mean that advisors would need to be paid in some other way.  There are advisors now that are fee-based, meaning that they charge a flat fee or a % of client assets.  These are typically advisors that work with wealthy clients, and more recently, online investment advisors like ModernAdvisor.

Why would the securities commissions want to ban trailer fees?  Over the past few years they have been commissioning a lot of research aimed at determining what effect trailer fees have on the funds that advisors recommend.  Unsurprisingly, this new research and similar research in other countries, overwhelmingly showed that trailer fees influence what funds are recommended to clients.  It seems obvious: when faced with comparable products advisors more often recommend the fund that pays them a higher commission which results in higher fees and lower returns for the clients.

Over the next few months expect to hear a lot from those industry groups that have a lot to lose if the status quo changes.  Their key argument is likely to be that trailer fees allow small investors to invest their money while receiving advice on their account.  Without the trailer fees, most small clients would not be able to access good advice, or so the argument goes.  Given many of our experiences at the local branch of one of the big banks, it is hard to see how that would be a big loss.

5 years ago, that argument may have had some merit.  But now that there are online investment advisors (aka robo-advisors) like ModernAdvisor, anyone with as little as $1000 to invest can get quality, unbiased advice on their investments at a very low cost.  As well, the online investment advisors in Canada (including us) are registered with the provincial securities commissions as portfolio managers, meaning that our advice is held to a much higher standard than the suitability standard that mutual fund dealers are held to.

The number of new housing starts continued to decline in May, dropping to 188,500 for the month, a decline of -1.5% from April.  Building permit activity also declined, dropping -0.3% in April.  Housing prices across Canada were up +1.8% in May according to Teranet.  Vancouver, Hamilton, Victoria, and Montreal all posted gains for the month that were above the national average.

Inflation was up +0.4% in May.  On an annual basis, the inflation rate rose +1.5%, and remains under the Bank of Canada’s target rate of +2%.  Core inflation which excludes more variable items such as gasoline, natural gas, fruit & vegetables, and mortgage interest was up +2.1% for the last year.  Retail sales rose +0.9% in April and were up +4.6% for the past year.

GDP was up slightly in April at +0.1%.  With growth and inflation remaining low, and excess capacity remaining in the economy, the Bank of Canada is unlikely to change interest rates at their July meeting.