Stock markets had another bad month in January. The Bank of Canada left interest rates unchanged despite analyst predictions and the Bank of Japan joined the negative interest rate club.

Stock markets had another poor month in January. The S&P/TSX Composite actually performed well compared to most stock markets around the world, and was only down -1.44% for January.  All of the major stock market indexes we track were negative when measured in their home currency and when measured in Canadian Dollars  The worst performing index for the month was the Russell 2000 (a measure of US small cap stocks) which was down -8.85%.  The German DAX was a close second at -8.80%.  Japanese stocks were close behind at -7.96%.  Volatility rose in both Canada and the US.  The S&P 500 had 5 days in January that were bigger than +/-2%, the most since August 2015.

Canadian bonds performed well, particularly the safer government issues. The broad FTSE/TMX Universe Bond Index was up +0.39% for the month, while the Federal Bond Index was up +0.91%.  Investment grade bonds in the US performed even better; the Merrill Lynch US Corporates AAA was up +1.13%.  But outside of that, the performance was decidedly negative.   The most speculative grade bonds as measured by the Merrill Lynch US High Yield CCC and Lower index was down -3.89%.  Canadian high yield was also negative for the month.

Commodities continued to fare poorly.  Oil continued to slide and was down -11.76%, finishing the month at US$33.62. Gold was one of the bright spots (pun not intended) at +5.30% for the year.  The broad Bloomberg Commodity Index was down -1.70% in January.

Analysts are not expecting oil prices to recover any time soon. Usually when the price of a commodity hits lows, suppliers reduce supply in order to better balance it with demand: translation, they reduce supply to push prices back up. With oil that does not seem to be happening. OPEC countries have not reduced supply as they are trying to gain back market share from high cost North American supplies like the US shale oil and Canadian oil sands. With the lifting of sanctions on Iran, expect supply to remain high.

The low Canadian Dollar doesn’t have many upsides for Canadians. Much of the produce in grocery stores this time of year comes from the US, so prices have been going up. Expect prices of anything imported to rise over the next few months. Apple has raised prices in the AppStore, and La-Z-Boy told me earlier this month that prices are going up on February 1 because of the low dollar.

If you work in the tourism industry, expect to be busier this year as more American tourists are expected to choose Canada. With Whistler and other ski resorts in BC having their best snow conditions in several years it should help draw more tourists. Real estate in Canada looks more attractive with the low Canadian Dollar, which is good if you’re looking to sell, but not good if you’re looking to buy in Vancouver and Toronto.

Economic theory suggests that a declining currency helps a country’s exports. Unfortunately, our chief exports like oil are not in great demand right now. Our manufacturing industries have shrunk over the last few decades as more and more companies began manufacturing their products overseas. So the benefit of a low Canadian Dollar is less pronounced now than it was in the 1980s. In fact, exports continued to grow even while the Canadian Dollar was near par. 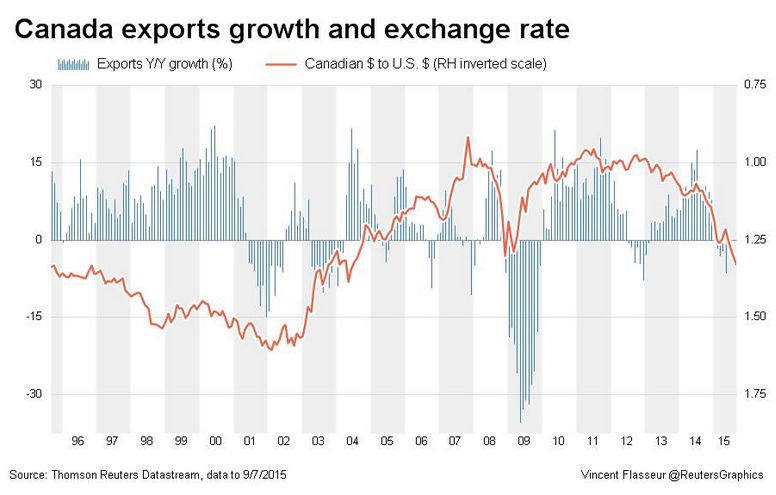 Japan joined Switzerland, Sweden and Denmark in the negative interest rate club, after the bank of Japan lowered its benchmark interest rate to -0.1%.

Inflation for December was -0.5%, or +1.6% over the last year. Core inflation which excludes more variable items such as gasoline, natural gas, fruit & vegetables and mortgage interest was +1.9%. Retail sales in November rose +1.7%, and were up 3.2% over the past 12 months.

After 2 months of flat or negative reports, the November GDP report for Canada was positive at +0.3%. With the continuing decline in oil and the Canadian Dollar, many analysts were expecting the Bank of Canada to cut interest rates by 0.25% to +0.25%. The Bank of Canada confounded the analysts and left interest rates unchanged at +0.5%. Inflation remains within the BoC’s target range and the economy continues to adjust to low oil prices.