August is typically a quiet month for the markets, with many traders taking time off. If any negative news comes out then markets tend to drop quickly. For most of August, markets looked like typical summer markets, until out of nowhere, the Chinese government devalued their currency and Chinese stocks started dropping. This sent waves of panic around the world and the sell off spread as investors questioned future Chinese growth prospects. Fortunately, the US economy is continuing to show strength and Q2 growth was revised upwards by over 1%.

All index returns are Total Return (includes reinvestment of dividends) and are in Canadian Dollars unless noted.

All equity markets we track had a difficult month in August, however all closed the month off their lows. The S&P/TSX Composite is now down for the year, while the S&P500 and MSCI Emerging Markets indexes are now down for the year when measured in their home currency. European stocks, Japanese stocks and MSCI World remain positive for the year. See our post about international investing if you don’t already have international exposure in your portfolio.

Unsurprisingly, volatility indexes rose sharply to levels not seen since the autumn of 2011. Yes, that is an increase of 134.57% on the VIX for August, it’s not a typo.

When stock markets sell off, bond markets typically rise as investors flock to their relative safety. However, in August bond markets sold off as well. The FTSE/TMX Universe Bond Index was down -1% and global corporate and high yield bond indexes were also negative. Even US and German government bonds, which are usually safe havens, were down a little. Investors preferred gold in August, pushing the price up 3.6%. Oil dropped below $40 during August, but recovered its losses quickly and actually finished the month in positive territory. Most other commodities were down for the month; the broad Bloomberg Commodity Index was down -0.9%.

The Canadian Dollar continued to weaken in August. The price for a US Dollar rose above 1.32, before dropping back to finish the month at 1.3157. Against the Euro, the Loonie also lost ground, nearing 1.50 at one point.

August started like a normal summer month, quiet with low trading volume, until the Chinese government devalued their currency and Chinese stocks started dropping quickly. Investors around the world started questioning the strength of the Chinese economy and what impact a slowing Chinese economy would have on the rest of the world, kicking off a multi-day global sell off. The S&P500 had 3 days in a row down -2% to -4% from August 20-24, after having only 3 days around -2% in the previous 18 months. Canadian markets weren’t hit quite as hard, having already been underperforming due to low oil prices. Stock markets have recovered some of their losses as investors started to recognize that the selling may have been overdone. The People’s Bank of China cut interest rates and the Chinese government started buying stocks, sending markets sharply higher. 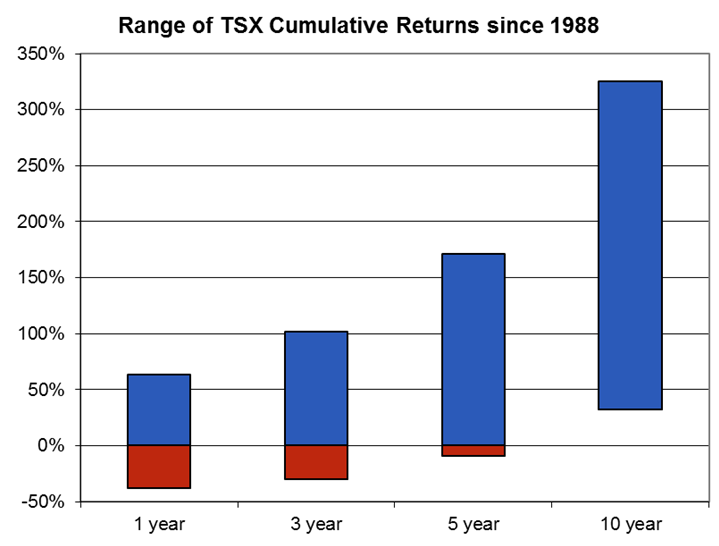 Of course, the best returns in those timeframes are quite attractive, which is the whole point of owning stocks. While it can be difficult to stomach short term volatility, it is important to remember that long term returns can be very attractive.

The reports on Canada’s housing market in August were mixed. Housing starts in July declined a little from June’s high of 202,300. Building permit activity in June rebounded sharply from May’s double digit drop. Since the dip in 2009, new house prices have been on a slow, steady rise and were up another 0.3% in June.

Inflation in Canada is starting to pickup, largely due to the drop in the Canadian dollar making imports more expensive. In July the Consumer Price Index (CPI) rose +0.1%, +1.3% over the last year. Core inflation which excludes more variable items such as gasoline, natural gas, fruit & vegetables and mortgage interest rose 2.4%. Retail sales in June rose 0.6%, and were up 1.4% over the part 12 months.

After 5 negative months, GDP was positive in June at +0.5%. Unfortunately that wasn’t enough to turn the second quarter positive. That means Canada had 2 negative quarters in a row (-0.2% in Q1 and -0.1% in Q2), indicating that the economy was in recession in the first half of 2015. Due to the time lag in receiving the reports, and the fact that June was the strongest in several months, it is possible that the recession has ended, making it unlikely that the Bank of Canada will need to cut interest rates at their September meeting.