Stock markets were generally positive in March, as were Canadian bonds.  Why a 100% equity portfolio might be a bad idea.

The S&P/TSX Composite was up +1.3% in March, its fourteenth positive month in a row.  The S&P500 was essentially flat for the month at +0.1%.  European stocks performed particularly well: the MSCI Europe Index was up +3.1%, driven primarily by German stocks, which were up +4.0%.  Emerging market stocks were up +1.8%.

On the bond side, the broad FTSE TMX Universe Bond Index was up +0.4% in March, while the short-term bond index was up +0.1%.  US bonds sold off slightly in March and were down between -0.4% and -0.1%.  The high yield bond indexes were mixed, while emerging market bonds were up +1.1%.

The Canadian dollar slipped against both the US Dollar and the Euro, -0.2% and -1.1%, respectively.

We’ve had a few clients lately point out that even at our highest risk level, there is still some fixed income in the portfolio, it is not 100% equities.  With stock markets in North America near all time highs and volatility near historic lows, it is not that surprising that some clients are looking for a very aggressive portfolio.  In many cases, these investors were not investing in the stock markets in 2007-2009 or 2000-2002 so they would not have experienced the steep and prolonged losses and very high day-to-day volatility.

It has been over a year since the S&P/TSX composite experienced a down day greater than -2% and almost 2 years since we’ve had a 30 day period with more than one -2% day.  Below is the realized volatility of the S&P/TSX Composite over the last 12 months and another over the last 24 months. 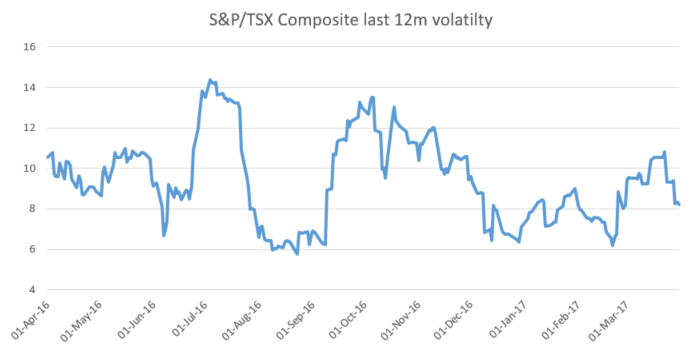 The last 12 months haven’t been very volatile; a reading under 20 is considered low while readings under 10 were pretty much unheard of until just a few years ago.  Even if we look back 5 years, the stock market has only been moderately volatile in a few relatively short periods. 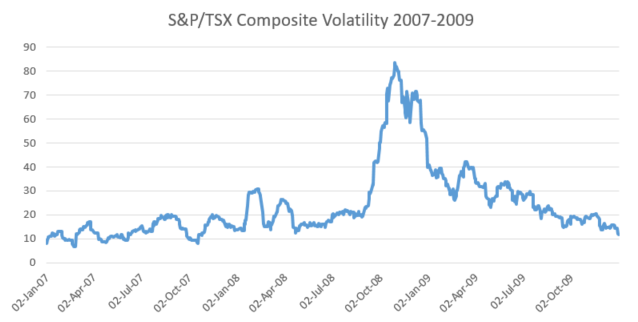 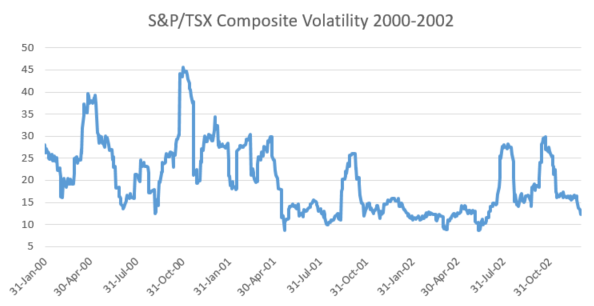 Volatility can be an abstract concept for many people, so let’s take a look at the actual returns.

If those kind of losses make you think twice about a 100% equity portfolio, good.  So what can we do to smooth it out?  Add fixed income.

Adding fixed income to a portfolio smooths out an investor’s experience when investing in the stock market.  You give up some of the potential gains over a 100% stock portfolio when stock markets are doing very well, but you make up for that in poor markets.  Clients in lower volatility portfolios are more likely to stick with their investment plans than those in 100% equity portfolios and are less likely to want to sell at just the wrong time.

The number of new housing starts rose +2.3% in February, while building permit activity in January rose +5.4%.

The inflation rate was +0.2% in February, or +2.0% on an annual basis.  Core inflation which excludes more variable items such as gasoline, natural gas, fruit & vegetables and mortgage interest was +1.7% for the last year.  Retail sales were up +2.2% in February, the largest increase since March 2010.  The growth was attributed to a surge in car sales, namely new cars.  Compared to a year ago, retail sales were up +4.5%.

GDP was up +0.6% in January, the largest monthly gain since June 2016.  The increase was attributed mainly to manufacturing, mining and oil & gas, and retail sales.  The Bank of Canada left the benchmark interest rate unchanged at their March 1st meeting.  The next meeting is scheduled for April 12th.