October was a good month for equity markets, but a mixed one for fixed income as central banks continue to raise interest rates. 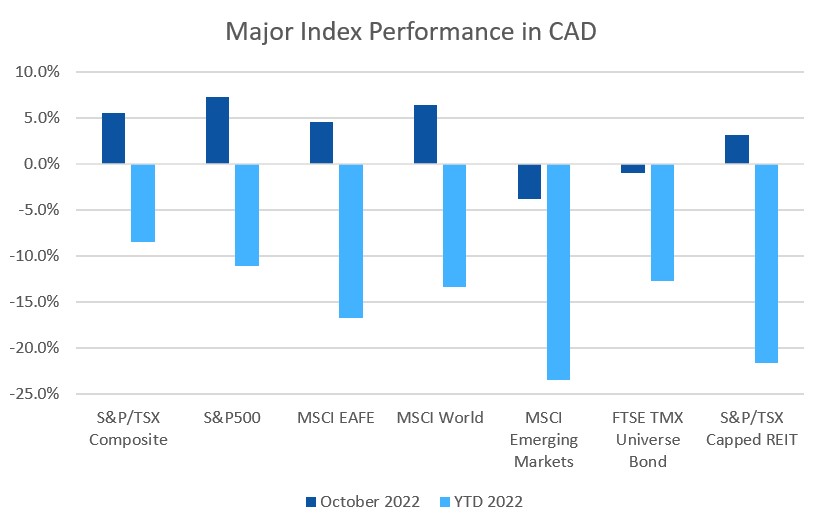 October was a good month for equity markets, but a mixed one for fixed income as central banks continue to raise interest rates.

The broad index of EAFE stocks (Europe, Australasia & Far East) gained +5.3% in October, bringing the YTD to -12.2%.  Out of the EAFE regions, European stocks performed a little better at +6.0% for the month.  Despite all of the turmoil in the UK following Brexit and turnover in the prime minster’s office, British stocks have weathered 2022 very well, gaining +2.9% in October and losing only -3.9% so far in 2022.  Japanese stocks gained +6.4% in October, while emerging market stocks were one of the few markets that lost in October, losing -2.7%.

The Canadian Dollar (CAD) lost ground against the US Dollar, declining -2.0% in October, but gained +1.5% against the Euro.

Below are the readings released in October for the major economic indicators: central bank interest rates, inflation, GDP and unemployment. 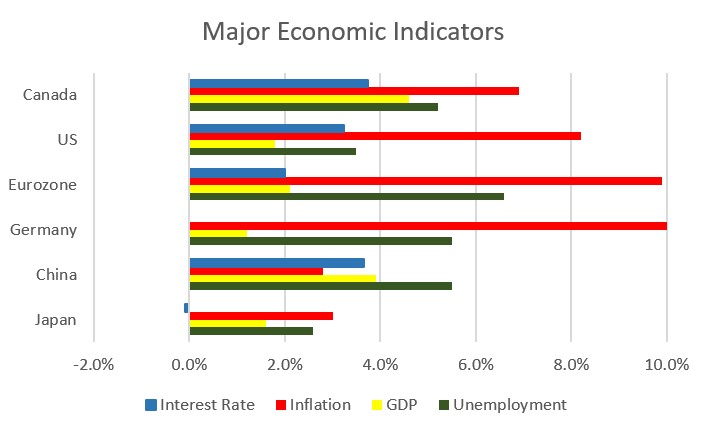 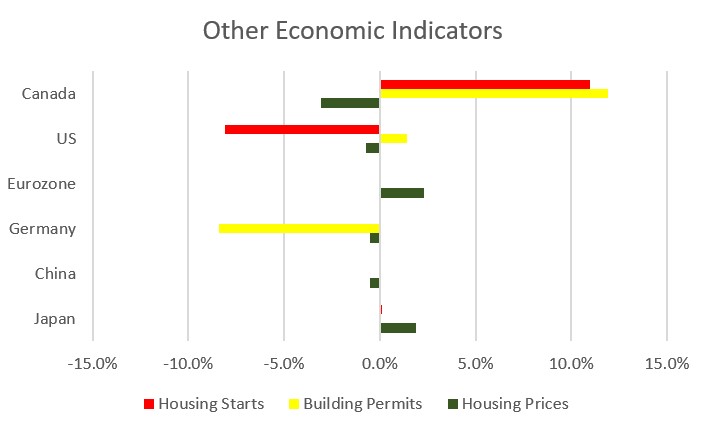 Higher interest rates are having an effect on housing prices across Canada; the Teranet index set a new record for the largest monthly decline (following the previous month’s record decline) since the Teranet index began in 1999, declining -3.1% in September and the fifth monthly decline in a row.  8 of 11 major markets posted declines, with the largest declines in Victoria (-5.9%), Vancouver (-3.5%) and Hamilton (-2.1%). Outside of the major cities, Peterborough (Ontario) was the largest decliner at -11.8% (!). The only gainers were Calgary (+1.2%), Halifax (+1.1%) and Edmonton (+0.2%).  The annual national price gain for the 12 months ended September 30 was +6.0%, a far cry from +35% gains we were seeing 6 months ago!

The level of new housing starts rose +11% in September to just under 300,000 homes, the highest level in almost a year. Urban multifamily housing (condos and townhouses) accounted for most of that (216,000).  The value of building permits issued rose +11.9% in August $12.5 billion, this was way above market expectations of a -0.5% decline. Both the residential and non-residential sectors posted strong gains (+12.0% and +11.8%, respectively) with Ontario providing much of the increase.

The inflation rate for September was +0.1%, and +6.9% on an annual basis; inflation could decline by 2% and still be higher than inflation at any point in the last 25 years.  A decline in gasoline prices helped transportation costs ease; inflation also eased in the recreation and education sectors. Meanwhile, food prices increased to a level not seen since 1981, exceeding +10%.  Core inflation which excludes more variable items such as gasoline, natural gas, fruit & vegetables and mortgage interest was +6.0%.  While the Bank of Canada has raised interest rates 6 times so far in 2022, it generally takes at least 12 months for interest rate increases to affect the economy – so don’t expect any major relief in inflation until well into 2023.

Canada’s GDP was up +0.1% in August (the same slight growth for 4 months in a row), with 14 of 20 industrial sectors posting gains.  Growth in services sectors (+0.3%), outweighed a -0.3% decline in the goods producing sectors.  Retail and grocery stores (not surprising given the continued high food inflation) performed well, while construction declined for the fifth month in a row.