Stock markets were positive in February, and Canadian and US stocks continued to hit new all time highs.  Should you change your investment style with markets all time highs?

February was generally a positive month, especially for US and international stocks.

On the bond side, the broad FTSE TMX Universe Bond Index was up +1.0% in February, while the short-term bond index was up +0.3%.  US bonds also performed well, with indexes of lower quality bonds again performing the best.  The high yield bond indexes were positive across the board, while emerging market bonds were one of the top performers at +3.6%.

Oil was up +2.3% in February, while gold was up +3.7% largely due to the continued decline in the US Dollar.  The broad Bloomberg Commodity Index was slightly positive at +0.2%.

We’ve been getting a lot of questions lately about what to do now that markets are at all time highs.  Our answer is, it depends on which markets you mean.

Yes, the S&P/TSX Composite in Canada, and the S&P500 and Dow Jones Industrial Average in the US have hit all time highs repeatedly over the last few months, but does that mean you should do something different with your investments?

If you already have a diversified portfolio that you add to regularly, then you should just keep doing what you’re doing.  When you add new money to your account you should be adding to the positions that are furthest below their target weights.  Depending on how everything else is doing in your portfolio, it could mean that you don’t need to add to Canadian or US stocks.

The other thing to consider is how much of your portfolio’s asset allocation is dedicated to Canadian and US stocks.  If you have a home bias like many Canadian (and US) investors, then you should consider changing your asset allocation so that you are more diversified geographically.

If you are buying Canadian or US stocks, you may be paying all time high prices, but the other thing to consider is what is the value of those assets?

There are many ways you can look at the value of an investment, one of the most commonly used is Price to Earnings, or P/E.  P/E is commonly calculated using the last 12 months of earnings so it can be a little volatile, or meaningless if a company has losses.  Robert Shiller, a finance professor at Yale University, created a version of the P/E that uses 10 year data called Shiller P/E.

We took a look at the Shiller P/E for Canada, the US and a few other markets.  If you’re not familiar with box and whisker plots here’s how to interpret them. 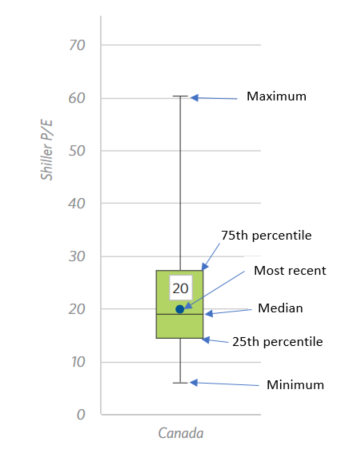 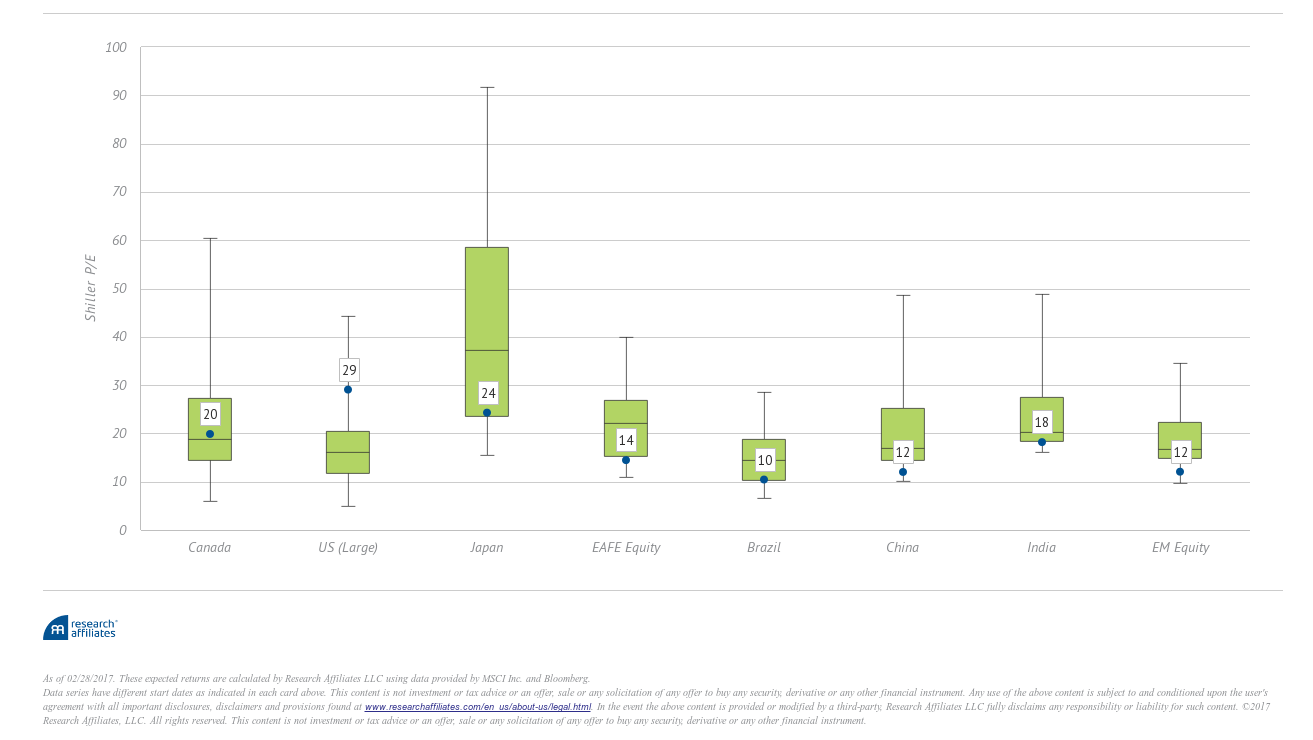 When we looked at countries and regions outside the US and Canada, we found that most of them are historically inexpensive.  EAFE (Europe, Australia, and Far East) are in the cheapest 25% of where it’s been historically, as are the emerging markets (EM Equity above).

While the US markets are at all-time highs, and are historically expensive from a valuation standpoint, if you have a well diversified portfolio you should have little to worry about.

Housing prices across Canada rose 0.5% in January.  Hamilton (+1.1%), Toronto (+0.8%), and Montreal (+0.8%) all posted monthly gains that were above the national average.  Vancouver ended its streak of three negative months with a +0.3% gain in January.

The number of new housing starts rose 0.9% in January, while building permit activity in December shrunk -6.6%.

The inflation rate was +0.9% in January, or +2.1% on an annual basis.  Core inflation which excludes more variable items such as gasoline, natural gas, fruit & vegetables and mortgage interest was +1.7% for the last year.  Retail sales were down -0.5% in January, the first decline in five months.  The decline was attributed to a -0.9% decline in auto sales.  Compared to a year ago, retail sales were up +4.3%.

GDP was up +0.3% in December, topping off the fourth quarter at +0.6%.  The increase was attributed mainly to growth in utilities, electricity generation, and natural gas distribution.  The Bank of Canada left the benchmark interest rate unchanged at their March 1st meeting.  The next meeting is scheduled for April 12th.