Most people know the biggest advantage of using an RRSP is the tax savings. But do you know how to maximize that refund? Or choose when a TFSA might be better?

We break it down so you can make those decisions in minutes.

Below is a table of the income tax brackets (applicable to BC). 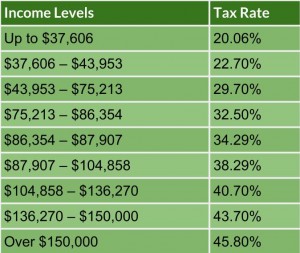 Since ModernAdvisor is based in B.C., all references to tax rates will be to combined federal and provincial tax rates in B.C.  For the tax rates applicable in your province a great source is taxtips.ca/tax_rates.htm.

The executive gets an additional savings of $85.90!  What we learn from this exercise is that the higher your income, the bigger bang for your buck.  In either case, if you decide to contribute to an RRSP and have enough cash to eliminate any income in your highest tax bracket, do it.

Now, consider: Do you expect your income to increase in the future?

If so, it makes sense to save your RRSP room until your income is higher so that you can save even more tax!  If you don’t expect that your income will increase in the future, it likely makes the most sense for you to use your RRSP contribution room now.  But keep in mind that an RRSP is really just deferring tax until the future when you withdraw the funds.

There is a possibility that contributing to an RRSP could cause you to pay more tax in the long run.  Pension income (including CPP and OAS) when combined with large RRSP withdrawals in retirement could push you into a higher tax bracket than when you were working.  This is mostly a concern for those who contributed to an RRSP while in lower tax brackets.  If you think this may apply to you, consider saving for retirement in a TFSA before an RRSP.

General rules of thumb to conclude: