Stock and bond markets were subdued, as is typical for August.  The Canadian economy posted its worst quarter since the financial crisis, meaning that interest rates in Canada are unlikely to change any time soon.  Meanwhile in Europe and Japan, US investors are turning negative yielding bonds into money makers.

August was a typically quiet month with most stock market indexes around the world little changed from where they started.

The S&P/TSX Composite Index was up 0.10% for the month, while in the US, the S&P500 was down -0.12%.  The only markets posting much in the way of gains were Germany, Japan, and the emerging markets.

When the US Federal Reserve raised interest rates by 0.25% to 0.50% in December 2015, many were expecting that it was just the start of a longer cycle of rising interest rates.  So far in 2016 no central bank in a major developed country has raised interest rates, but several have cut rates further, and some into negative territory.

Due to this sustained period of low interest rates, the amount of bonds trading at a negative yield continues to grow as more and more investors place more and more money in the “safety” of bonds.

Why would anyone want to buy bonds with a negative yield? Some investors like large pension funds are required to invest in highly rated (AA or AAA) bonds.  In most countries that means government debt is most often the best option, but in many countries they have negative yields out to the 10 year bond or further.  Central banks that are continuing to do quantitative easing are also buying government bonds, which helps keep bond yields in negative territory.

With bonds, the more demand there is for the bond the higher the price goes, which means that since prices can keep rising the yield can eventually go negative.  Rarely are bonds issued with a negative yield, it is the trading in the secondary market that pushes the yield negative.

All of the cash flooding the bond markets has led to some very creative trades by large financial institutions and money managers.  A recent Bloomberg article highlights some of these trades.

Pimco (one of the largest bond fund managers in the world) and China (the largest holder of US bonds) have been buying Japanese bonds with a negative yield and then using a swap contract to turn that negative yield into a positive return.  It seems that with US government bonds one of the few left with positive yields, the demand for US dollar denominated bonds is quite high. 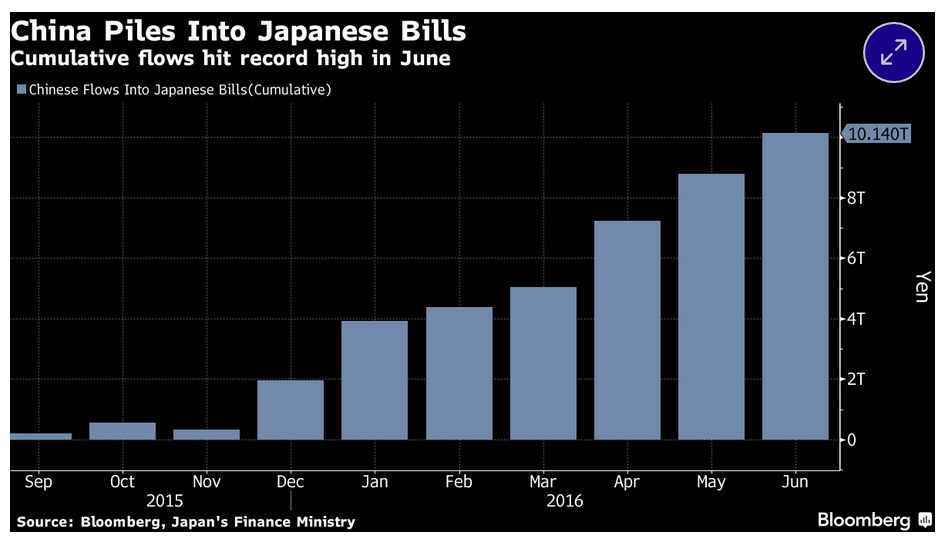 So investors like Pimco and China that have large holdings of US bonds can provide liquidity to the market by lending them out, and are making a decent return doing it.  The use of a swap lets them essentially lock in their return, so there is no risk (other than if the party on the other side of the swap stops paying, which is known as counterparty risk).  The money manager borrows Yen to buy the Japanese bond and lends US Dollars in return (they pay the 3 month Yen Libor rate of -0.02% on the Yen borrowed and receives 0.82% on the US Dollars they lend).  All in, after the cost of the swap, you can earn 1.24% doing this, the highest its ever been.  Similar profits can be made in Euros.  While that doesn’t sound like much, quadrupling the return on your US bonds without using leverage is huge.  Unfortunately, unless you have hundreds of millions or billions in the bank, this risk-free return is out of reach. 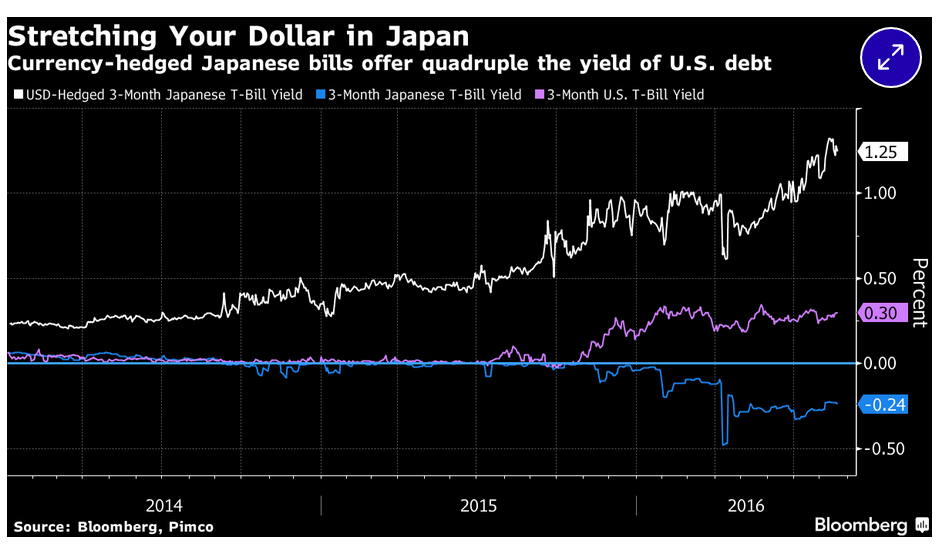 Real estate is always a hot topic, especially after the provincial government in BC instituted an extra 15% property transfer tax on homes sold to foreign buyers in Greater Vancouver in July.  For more on that check out last month’s update.  Housing prices across Canada in July rose 2.0% according to Teranet.  Victoria (+3.8%), Toronto (+3.1%), Hamilton (+2.4%), and Vancouver (+2.3%) all posted monthly gains that were above the national average.  Quebec City was the laggard at -1.6%.

Inflation was -0.2% in July.   On an annual basis, the inflation rate rose +1.3%, and remains under the Bank of Canada’s target rate of 2%.  Core inflation which excludes more variable items such as gasoline, natural gas, fruit & vegetables and mortgage interest was up +2.1% for the last year.  Retail sales were down -0.1% in June, but were up +2.7% for the past year.

GDP was up 0.6% in June, recovering the drop of -0.6% from May.  The drop and subsequent recovery can both be attributed to the shutdown and restart of the oil sands operations in Fort McMurray.  For the second quarter of 2016 the decline was -1.6% (annualized), the largest drop since the end of the financial crisis in 2009.

This weak showing has some economists forecasting that the Bank of Canada’s benchmark interest rate will remain unchanged through the end of 2017.  The BoC next meets on September 7.