September was another negative month for most global equity markets, with the exception of the US.

On the bond side, the broad index of Canadian bonds, FTSE TMX Universe Bond Index was down -1.0%, and the FTSE TMX Short Term Bond Index was down -0.2%.  Investment grade US bonds, as measured by the Merrill Lynch indexes, were also down. US and Canadian high yield bonds were up as were emerging market bonds.

The Canadian Dollar strengthened in September, gaining +0.8% against the US Dollar and +1.0% against the Euro.

With stock markets around the world, except the US, not providing much in the way of positive performance many investors are worried about their portfolios.  Sorry to say I don’t have a magic solution for them other than patience.

Vanguard crunched the numbers on how basic stock and bond allocations have performed over the past 92 years.  While these are US market focused numbers, they provide some insight into what to expect from diversified portfolios for Canadians as well. 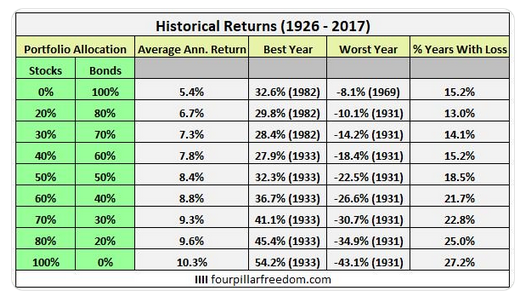 At ModernAdvisor we don’t have 92 years of performance history, so instead we looked at rolling 12 month periods.  When including our backtested performance for 2011 to 2015, that gives us 82 observations to work with. 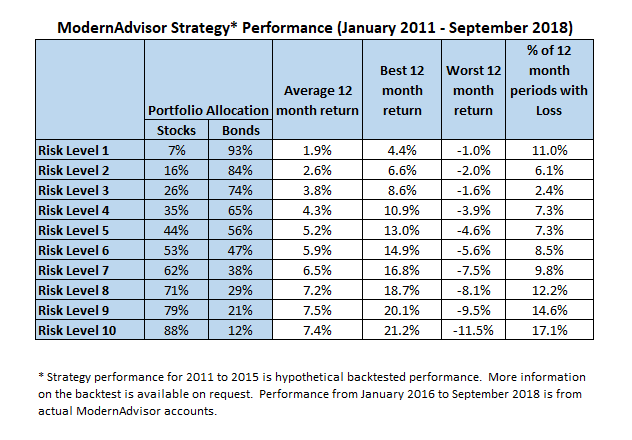 The last 12 months have been a reality check for many investors expecting their portfolio or account to be up every month or quarter.  For a diversified portfolio that includes Canadian and international stocks and bonds that isn’t a realistic expectation.  In our review of the various ETFs we use, I would expect all of our portfolios to be negative in at least 1 out of every 5 months, or at worst 1 out of every 3 months for the highest risk portfolios.  But with the average monthly gain exceeding the average monthly loss, over the long term, your performance will be comfortably positive if you have patience to ride out the negative periods.

The level of new housing starts declined -2.3% in August to 201K, while the value of building permits remained steady at $8.2 billion in July.

The inflation rate for August was -0.1%, and +2.8% on an annual basis.  All eight components of the inflation calculation rose, with transportation the largest contributor.  Core inflation which excludes more variable items such as gasoline, natural gas, fruit & vegetables and mortgage interest was +1.7%.

Canada’s GDP growth was up +0.2% for July.  The goods-producing sectors gained +0.3%, as gains in manufacturing and utilities offset declines in construction, mining, and oil & gas.  The services industries gained +0.2%, led by wholesale trade, transportation, and real estate services.

The Bank of Canada left interest rates unchanged at 1.5% at their September 5th meeting.  With the NAFTA situation seemingly resolved the BoC is expected to raise interest rates at their October meeting.