May saw most equity markets give back some of their gains from the previous few months. REITs and bonds helped to offset some of those losses. 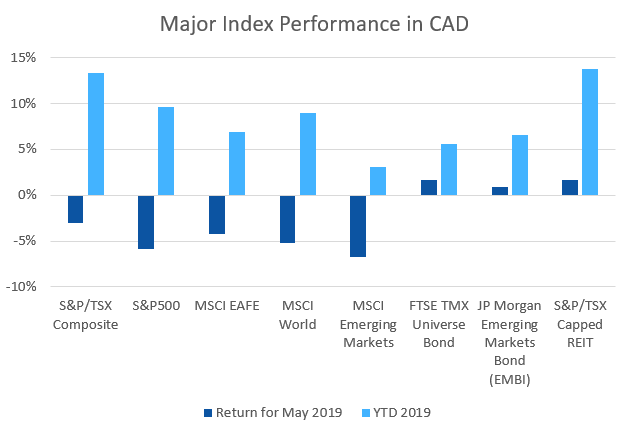 May was a reminder for those that forgot about last December, that markets go down as well as up.  The S&P/TSX Composite was down -3.1% in May, bringing the YTD down to +13.4%.

EAFE (Europe, Australasia & Far East) stocks were down -5.3% in May, was were European stocks.  British stocks fared a little better for the month at -3.5%.

The back and forth trade announcements from both China and the U.S. recently, are widely named as the cause of equity market corrections around the world in May.

While the changes in direction seem abrupt, surely no one can be surprised that neither country has settled easily. Some cause for surprise comes from Moody’s Analytics though. It indicates that North American real GDP growth will suffer more than China’s from a trade war, based on year-ago U.S. trade policy.

Trade wars are rarely good for anyone. Tariffs influence economic growth in a way parallel to the effect of friction on a machine.

Bond markets around the world were supported by assets moving from world equity markets. This is a healthy and normal rotation, and is a primary reason why all ModernAdvisor portfolios have appropriate allocations to bonds.

Canada has had its own trade issues with the U.S. About 30% of the revenues to Canada’s biggest companies still comes from those companies’ U.S. exposure.

No one knows whether a decline like the one in May, will develop into something more. There are reasonable and believable stories indicating both directions. Whenever something like this happens, it can feel like this time things can only become worse. The reality is that you don’t have to worry about that. If you stick with your sensible plan, focused on your objectives, and if your investments follow evidence rather than stories, you will meet your needs.

Many Canadians need or want to delegate management of their investments. If this feels like you, having a sensible, evidence-based plan is very important. 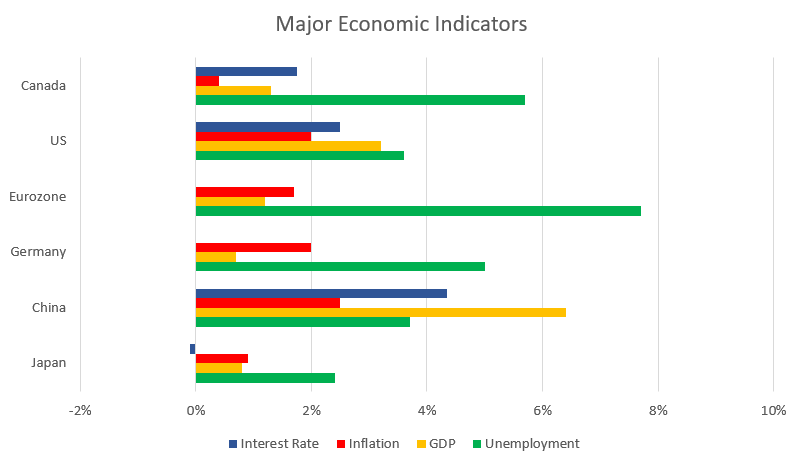 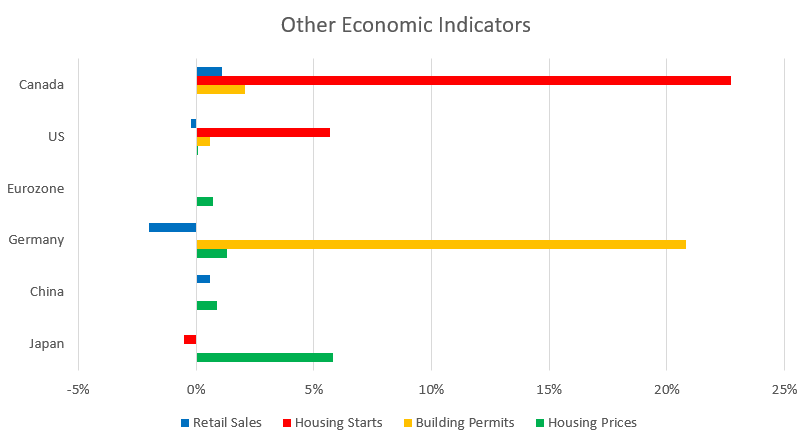 Canada’s unemployment rate declined slightly to 5.7% in April with 106,500 new jobs added, the strongest employment gain on record.  73,000 were full time and 33,600 were part time jobs.  Most of the gains came from Ontario, Quebec and Alberta.

The level of new housing starts rose 22.7% in April to 235,500 units.  The value of building permits issued in March rose 2.1% to $8.1 billion in March; the growth came solely from commercial construction as residential construction declined.  .

The inflation rate for April was +0.4%, and +2.0% on an annual basis.  Core inflation which excludes more variable items such as gasoline, natural gas, fruit & vegetables and mortgage interest was +1.9%.

Retail sales rose +1.1% in March; compared to a year ago retail sales were up +2.6%.  Sales rose at gas stations (due to higher prices), clothing stores, and building material and garden stores. Sales fell at new and used car dealers.

As expected the Bank of Canada left its benchmark interest unchanged at 1.75% at its May 29th meeting.