March was another down month for most markets. Bonds and REITs helped to provide some relief for investors.

The bond market was again one of the few bright spots.  The broad index of Canadian bonds, FTSE TMX Universe Bond Index was up +0.7% in March, while the FTSE TMX Short Term Bond Index was up +0.2%.  Both are up marginally for 2018.  US bonds were mixed; investment grade credits were positive while the high yield indexes were down around -1.0%.  Emerging market bonds were up +0.9% in March.

The Canadian Dollar continued its slide in March losing -0.7% against the US Dollar and -1.5% against the Euro.

The first quarter of 2018 brought the unwelcome return of volatility.  Stock and bond markets around the world were mostly negative, not helping the performance of the ModernAdvisor Core portfolios.

While no one likes to see a negative quarter, given the volatility of the markets over the period the portfolios held up relatively well.  Strong contributions from emerging market stocks helped to offset losses on Canadian, US, and EAFE (Europe, Australasia, Far East) stocks in our more aggressive portfolios, while Canadian bonds were the largest positive contributor for our most conservative portfolios.  Exposure to Canadian REITs also contributed positively, but that positive contribution was mostly offset by losses on emerging market bonds. 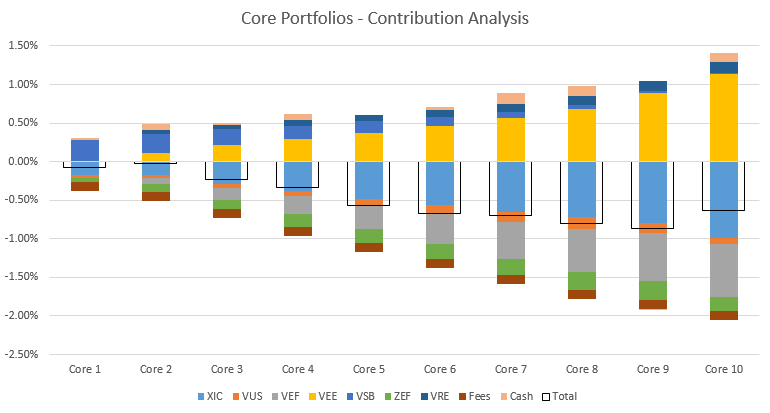 The volatility of the stock markets in the first quarter also shows up in the daily performance of our portfolios.  Looking at rolling monthly periods, we see a few spikes in volatility for the Core portfolios: mid 2016, September 2016 and February 2018, but we also see how calm most of 2017 was, particularly the fall of 2017.  With monthly periods we see a lot of noise, most of which disappears with annual periods.

Some of our clients have commented about waiting until volatility declines to add to their accounts at ModernAdvisor.  Unfortunately, when markets are volatile is usually the best time to invest.  You can often buy at a discount, especially when other investors are panicking about relatively minor declines.

The level of new housing starts rose +6.7% in February to 230K, while the value of building permits issued in January rose +5.6%.

The inflation rate for February +0.6%, and +2.2% on an annual basis, the highest level since 2015.  Core inflation which excludes more variable items such as gasoline, natural gas, fruit & vegetables and mortgage interest was+1.5%.  The tick-up in inflation makes it more likely that the Bank of Canada will raise interest rates at their next meeting.