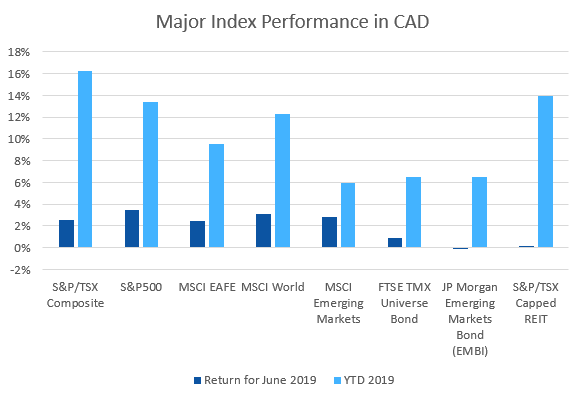 June saw most equity markets bounce back from the losses in May.  The S&P/TSX Composite was up +2.5% for the month, bringing the return for the first half of the year to +16.2%.

The Canadian Dollar (CAD) gained +3.3% against the US Dollar on expectations of a US interest rate cut. Against the Euro, CAD gained +1.4% in June.

For over a year, trade tensions between China and the U.S. have been widely accepted as one of the biggest risks to global economies and markets. This assessment is based on the best analysis by the best-informed sources. Many investor decisions were influenced by this perception of risk.

Then Presidents Trump and Xi met at the G20 Summit in the final days of June. Reports from both sides are positive in tone yet vague on details. Xi says, “China and the United States both benefit from cooperation and lose in confrontation.” Trump says, “We’re going to be strategic partners.”

Even one month ago, almost no one was predicting or betting that they would work out a compromise. Now that trade negotiations have resumed, what about the investment decisions prompted by those perceived risks?

Britain’s leaving the EU was supported three years ago by 52% of the voters in the referendum. Markets reacted dramatically. A broad consensus of economic studies is that Brexit is bad in any form. Brexit still has not happened and has just been postponed for at least six months. Will it ever happen? Three years ago, I saw no one predicting this or betting on it.

Making decisions based on news is not investing; it is speculating.

Such volatility can cost anyone who tries to anticipate it. Making decisions based on recent performance is not investing; it is speculating.  Investing success for you will come from basing your savings plan on long term evidence that serves your best interests. This is how ModernAdvisor helps you. 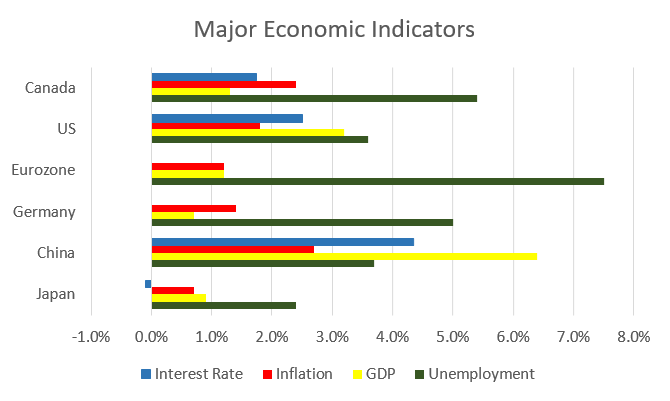 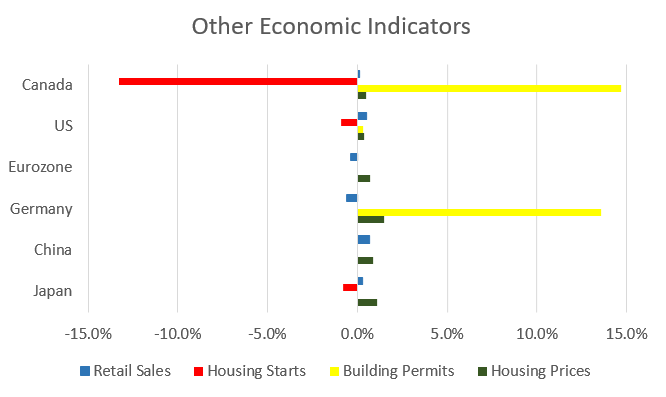 Canada’s unemployment rate declined to 5.4% in May, the lowest since 1976.  27,700 new full time jobs were added, the part time jobs figures were flat.  Ontario, BC and Nova Scotia showed the largest gains, while Newfoundland and PEI posted job losses.

The inflation rate for May was +0.4%, and +2.4% on an annual basis.  Core inflation which excludes more variable items such as gasoline, natural gas, fruit & vegetables and mortgage interest was +2.1%.