July saw equity markets continue their recovery, with some even turning positive for the year. 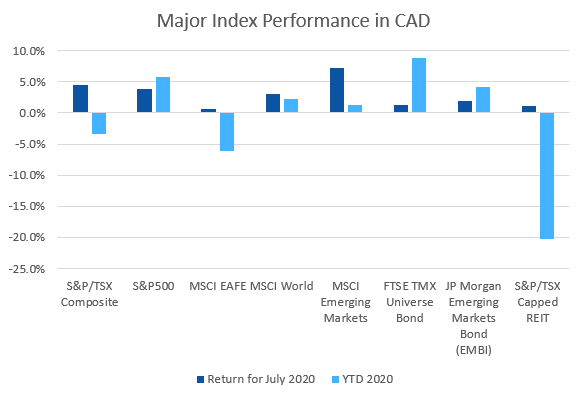 Most major equity markets continued to recover from the difficult first quarter of 2020.

Bonds have been fairly steady performers for 2020, with only March being a down month for some indices.  Canadian bonds were positive in July; the FTSE/TMX Universe Bond Index was up +1.3% and the FTSE/TMX Short-term Bond Index rose +0.5%, its 7th positive month in a row.  Those indices are up +8.9% and +4.5% for 2020.  All of the Merrill Lynch US bond indexes we follow were up for July; the investment grade indexes were up 3-4% while the speculative and HY indices were up more than +4%.  The AAA index is up more than +13% for 2020, while the highly speculative end of the credit spectrum, CCC, remains down -11% for the year.  Emerging market bonds were up +2.0% in July and are up +4.2% for 2020.

The Canadian Dollar (CAD) has recovered much of the ground lost during the worst of the pandemic as oil prices have recovered.  In July CAD gained +1.6% against the US Dollar and lost -3.4% against the Euro.  For the year CAD remains down -3.2% and -8.6% compared to those currencies. 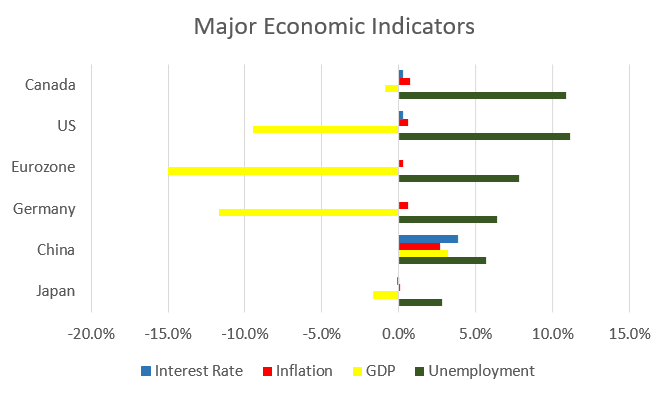 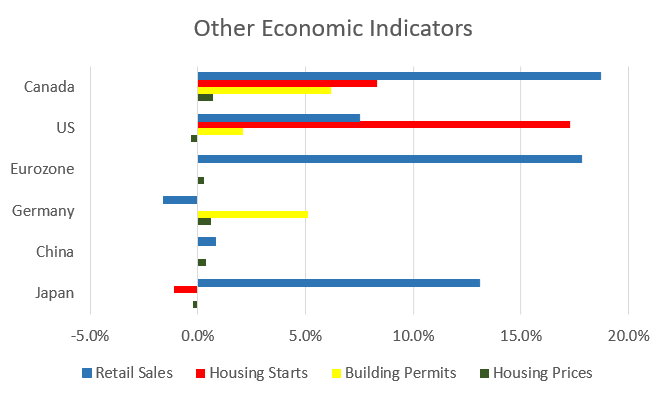 Canada’s unemployment rate declined to 12.3% in June after peaking at 13.7% in April, but still a far cry from the 5.6% seen before the pandemic.  The economy added 952,900 jobs in June with the split roughly 50/50 between full and part time work.

The level of new housing starts rose +8.3% in June to 212,100 units after cratering to 164,800 in April.  All of the growth came from multifamily urban construction as single family home construction declined.  The value of building permits issued in June rose +6.2%, down from the +21.6% gain in May.  Residential permits value was $5.3 billion, while non-residential building permit value was $2.7 billion.

The inflation rate for June was +0.8%, and +0.7% on an annual basis.  Core inflation which excludes more variable items such as gasoline, natural gas, fruit & vegetables and mortgage interest was +1.1%.  Prices were one of the few economic measures that didn’t see substantial declines during the worst of the pandemic.

Canada’s GDP was up +4.5% in May, the strongest monthly increase on record, following a decline of -11.7% in April. 17 of 20 industrial sectors posted gains in May, while retail trade posted its largest gain on record +16.4% as 11 of 12 subsectors gained.

As expected, the Bank of Canada left its benchmark interest rate at 0.25% at the July 15 meeting.  The BoC continues to purchase at least 5 billion in Federal government securities per week. The central bank’s other quantitative easing measures were reduced or ended in June and July.