January was a good month for most equity markets, but the Canadian market was left out.  The US market was one of the top performers but quickly reversed at the start of February, reintroducing the concept of volatility to many investors.

The Canadian dollar showed strength against the US Dollar in January, gaining +2.0%.   Against the Euro the Canadian Dollar lost -1.6%.

The volatility on the global stock markets at the start of February caught many people by surprise.  For new investors it was a good, if unwelcome, reminder that most investments go down as well as up.

The press made much of the Dow Jones Industrial Average’s two drops of more than 1,000 points, of course forgetting to put that in perspective.  If you start at 25,500, a drop of 1,000 points is a little less than -5%, which is not even in the top 10 worst days for that US stock market index.  If you have a diversified portfolio and are investing for the long-term, then the recent volatility should be nothing to worry about.

We’ve got a little more than 2 years of history at ModernAdvisor now. While no major financial or market crises have occurred in that time frame, it does give us more than 500 daily returns for some of our portfolios.  To help put the negative days in February into perspective, we took a look at the distribution of the daily returns for our Risk Level 8 portfolio. 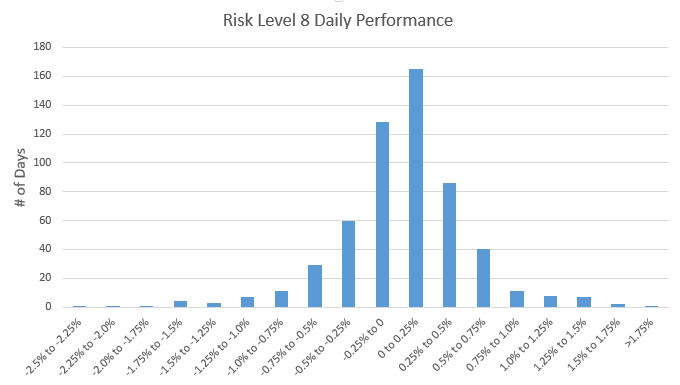 The big negative days are almost non-existent: the portfolio was down more than -2% in only 0.4% of the days (3 out of 565 days) since we launched.  It is important to remember that these big negative days do happen but they are few and far between and actually have very little impact on your long term returns.  Since we launched the portfolio, 57% of the daily returns were positive and 43% of the daily returns were negative.  While that win-loss ratio might not sound very impressive, the annualized return of that portfolio is +10%.

The day to day movements in the stock markets are basically just noise, but over time you will see a trend, and the longer that time frame, the more obvious that upward trend becomes.  That is important to keep in mind the next time the markets’ daily ups and downs throw you for a loop.

Housing prices across Canada rose +0.2% in December, but only 5 of 11 metropolitan areas were positive.  Most of the gain was the result of a +1.3% rise in Vancouver.  Winnipeg and Halifax were both up +1.9%, but have a minimal impact on the index due to their smaller size.  Victoria was top decliner at -1.0%, Calgary, Hamilton, Toronto, and Montreal were also down.

The level of new housing starts declined -13.8% in December, while the value of building permits issued in November declined -7.7%.

The inflation rate for December was -0.4%, and +1.9% on an annual basis.  Core inflation which excludes more variable items such as gasoline, natural gas, fruit & vegetables and mortgage interest was+1.2%.

Retail sales were up +0.2% in November, or +1.6% excluding auto sales.  Sales rose at gasoline stations, and electronics and appliance stores, while sales declined at new car dealers.  Compared to a year ago, retail sales were up a healthy +6.5%.

Canada’s GDP growth was +0.4% for November; the goods producing sectors rose +0.8% while the services sector expanded +0.3%.

The Bank of Canada met on January 17, and as expected increased the benchmark interest rate to +1.25%.