Stock markets were subdued in January as investors continued to ponder the implications of a Donald Trump presidency.  Despite that, the S&P500 and TSX60 hit new all time highs in January.  ETFs have been seeing broad adoption globally, but Canada has been lagging.  Why?

January was a subdued month as investors continued to ponder the possible implications of a Donald Trump presidency.   Most stock markets were marginally positive and volatility declined.

Much was made of the Dow Jones Industrial Average hitting 20,000, but for those familiar with how that index is calculated, it was a non-event.

The S&P/TSX Composite was up +0.6% in January, its twelfth positive month in a row.  The S&P/TSX 60 (a large cap subset of the S&P/TSX Composite) continued to hit new all time highs in January.  The S&P500 was up +1.8% and also hit several new all time highs in January.  Japanese and British stocks were down around half a percent, while German stocks were up about half a percent.  Emerging markets were the top performers, up +4.0%.

On the bond side, the broad FTSE TMX Universe Bond Index was down -0.1% in January, while the short-term bond index was up +0.2%.  US bonds performed well, with indexes of lower quality bonds performing best.  The high yield bond indexes were positive across the board, while  emerging market bonds were negative.

Oil was down -1.7% in January, while gold was up +4.9% largely due to the drop in the US Dollar.  The broad Bloomberg Commodity Index was flat for the month.

At ModernAdvisor we believe that most investors are best served by investing in broadly based, low cost index funds.  That’s why all of our clients’ portfolios are constructed using broadly diversified, low cost exchange traded funds.  Some individual investors and institutional investors are on board, but many are still sticking with actively managed high cost mutual funds trying to beat the market.

Those looking for low cost investments have been choosing exchange trades funds (ETFs) instead of mutual funds.  The financial press has been extolling the virtues of low cost ETFs and investors around the world have been flocking to them. Except in Canada.  The size of the ETF market in Canada has been growing quickly, but mutual funds are still growing at least as fast. 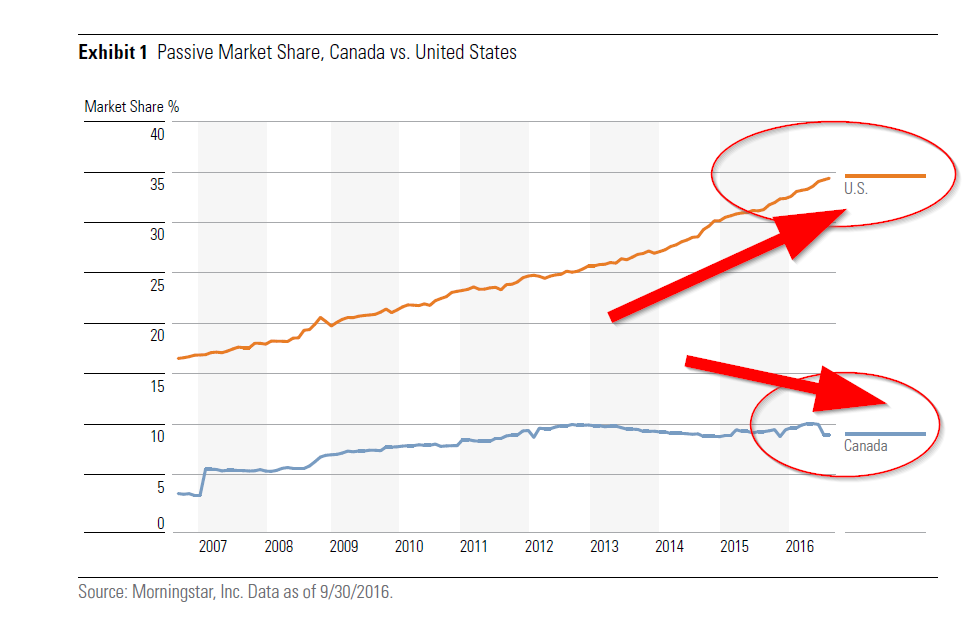 Why is Canada so far behind?  Well, Canada tends to be at least 5 years behind when it comes to new innovations in the financial markets.  But that wouldn’t account for all of the difference.  The majority of the slow adoption can likely be traced to how actively managed mutual funds are sold in Canada.

In most cases, Canadians’ first introduction to investing is opening an RRSP (or TFSA) at their local bank branch.  In a bank branch you are most likely to encounter a “financial advisor” who has a quota to sell products, and what they typically sell are actively managed funds that have a hefty commission.  They have no incentive to sell index funds that don’t pay a commission, and some of the more astute salespeople will have a list of bogus reasons to help convince clients to stay with expensive actively managed funds.

Unfortunately, most actively managed mutual funds do not beat the stock market indexes over the long term.  There is a lot of evidence that shows this; S&P produces a report for most of the major developed markets around the world and we see this in all countries.  Check out our blog post on the Canadian results as of 2014.

The other issue is regulations.  For years it was basically up to the client to ask what fees they were paying.  A few years ago clients were required to be provided with a fund facts document that includes the fees.  But it was still up to the client to read it, the advisor had no incentive to point the fees out.  Starting in 2017 clients will be provided with a fee report that shows what compensation their advisor’s firm received from their account.  With mutual funds that means the trailing fee that comes out of the MER.

The inflation rate was negative in December at -0.2%, the second month in a row of deflation, and the fourth negative month in the last six.  On an annual basis, the inflation rate was +1.5%, and remains under the Bank of Canada’s target rate of 2.0%.  Core inflation which excludes more variable items such as gasoline, natural gas, fruit & vegetables and mortgage interest was +1.6% for the last year, the lowest reading in more than 2 years.  Retail sales were up +0.2% in December, or +0.1% excluding auto sales.  Compared to a year ago, retail sales were up +3.0%.

GDP was up +0.4% in November, slightly ahead of the expected +0.3%.  The increase was attributed to +1.4% growth in manufacturing output and oil and gas extraction.  The finance and insurance sector grew +1.5%, the largest monthly increase in 2 years.

The Bank of Canada left the benchmark interest rate unchanged at their January meeting, and increased their GDP forecast for 2017 to +2.1% from +2.0%.  Their next meeting is scheduled for March 1st.