February was the most difficult month we’ve seen on the global stock markets in some time.  Bonds provided a bit of a safe haven as Donald Trump looks to be starting a trade war as a negotiating tactic.

In February the Canadian dollar gave back January’s gains and then some, losing -4.2% against the US Dollar and -2.3% against the Euro.

Donald Trump has been banging on since his campaign for president began about how the US has been treated unfairly and terribly by its trading partners.  Like the world is beating up on ol’ Uncle Sam.  I think most people with a global perspective would agree that US companies are among the shrewedest in the world, making it highly unlikely that they have been taken advantage of (in most cases they are the ones taking advantage of everyone!).

So what is behind the US President’s angst over trade?  Part of it can be traced to selective use of statistics as well as not seeing the full picture (or willfully ignoring it).  He could also benefit from a crash course in Econ 101.

The current account is composed of the balance of trade, net foreign income and net cash transfers.  The balance of trade is exports less imports, net foreign income is the income earned on investments made abroad less income paid on investments owned by foreign investors, and net cash transfers is the amounts transferred abroad as foreign aid and foreign workers sending earnings home.  Balance of trade is the largest component of the current account in most countries.

So that’s the ‘basics’ of international trade and it’s quite a bit more complicated than just the trade balance.  And we’ve not even touched on the effect of budget deficits and foreign exchange rates.

As you can see a trade deficit is only one of many components of a country’s international financial situation.

Trump likes to focus on the goods part while ignoring the rest, like most things.  The US does have a large deficit on goods trade, but has a surplus in services and income – but the net effect is a negative current account deficit.   To offset that, the US has a large capital account surplus. 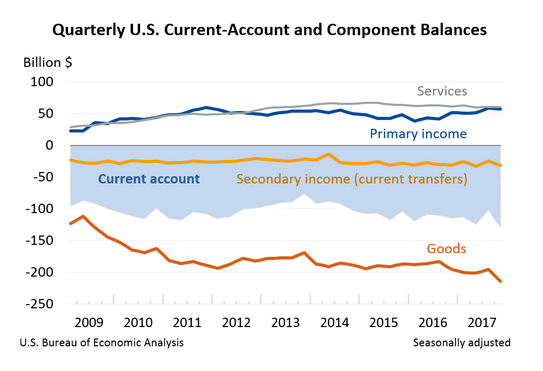 Over the last decade the US has been sucking up about a trillion dollars of investment a year on average.  The other interesting thing is the income surplus – they’re earning more on their investments than paying out to foreigners. 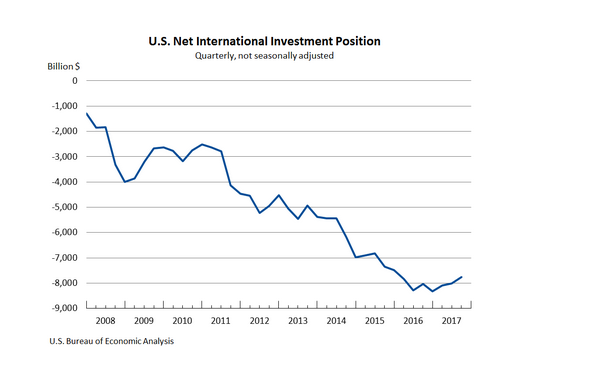 So if the US has been importing all this capital, what have they been doing with it?  A lot of it has been going to financing their large budget deficits, which doesn’t seem to be coming to an end any time soon.

Tariffs, quotas, and other trade restrictions would likely reduce imports while also reducing exports as other countries retaliate.  So the current account would shrink and the capital account would also shrink.  If Trump is successful in reducing the goods side of current account deficit, unless the US’ budget deficit shrinks, the US would experience exchange rate volatility not seen since when the fixed exchange rate system ended in the 1970s.

The level of new housing starts was flat in January at 216K, while the value of building permits issued in December rose +4.8%.

The inflation rate for January was +0.7%, and +1.7% on an annual basis.  Core inflation which excludes more variable items such as gasoline, natural gas, fruit & vegetables and mortgage interest was+1.2%.

Canada’s GDP growth was +0.1% for December 2017, inline with expectation.  The services sector grew +0.1% while the goods producing sector declined -0.1%.

The Bank of Canada met on March 7, and as expected left the benchmark interest rate at +1.25%.