Nearly all major equity markets continued their recovery from the difficult first quarter of 2020. 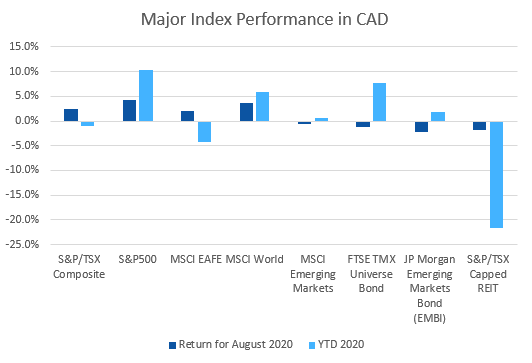 Nearly all major equity markets continued their recovery from the difficult first quarter of 2020.

The Canadian Dollar (CAD) has recovered much of the ground lost during the worst of the pandemic as oil prices have recovered.  In August CAD gained +2.7% against the US Dollar and +1.6% against the Euro. 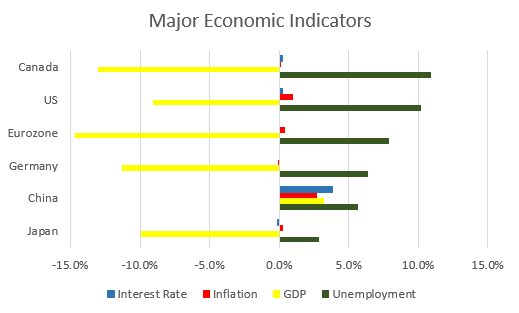 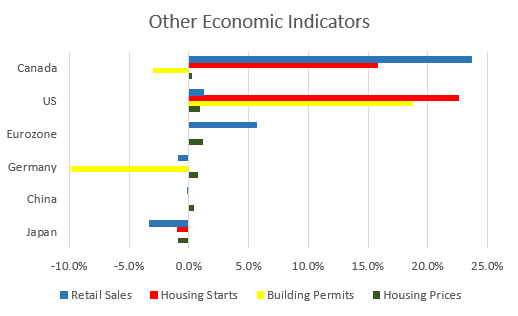 Canada’s unemployment rate declined to 10.9% in July after the economy started reopening from the COVID related closures.  The economy added 418,500 jobs during the month, mostly from part-time positions (345,300).

The level of new housing starts rose +15.8% in July to 245,600 units, the highest reading since November 2017.  The majority of the growth came from multifamily urban construction.  The value of building permits issued in July declined -3.0% to $7.8 billion. BC, Quebec and Newfoundland posted large double digit declines

The inflation rate for July was -0.1%, and +0.1% on an annual basis.  Core inflation which excludes more variable items such as gasoline, natural gas, fruit & vegetables and mortgage interest was +0.7%.  Prices for food, shelter, transport, and recreation all declined.

Canada’s GDP was up +6.5% in June, the strongest monthly increase since the inception of the data series in 1961. 19 of 20 industrial sectors posted gains for the month, with accommodation & food services, retail trade, and manufacturing being the largest gainers.

As expected, the Bank of Canada left its benchmark interest rate at 0.25% at the July 15 meeting.  The BoC continues to purchase at least 5 billion in Federal government securities per week.