April was a good month for Canadian and European stocks helping to offset declines in bond markets.

At ModernAdvisor we’ve been reviewing client portfolios for over 3 years.  What the majority of them have in common is a lack of emerging markets exposure.  They all have exposure to Canadian stocks and US stocks.  Most of the clients that ask us to review their existing portfolios before they move to ModernAdvisor also have some exposure to international developed markets like Europe and Japan.  If they have an international stock mutual fund it might have a small amount (less than 10%) in emerging markets.  If that mutual fund is 20% of their portfolio, that would work out to 2% emerging market exposure in their entire portfolio.  Very few people have a dedicated emerging market fund; more people will have a real estate or natural resources fund.

When you run the numbers, exposure to emerging markets can add significant value to Canadians’ investment portfolios. Since 1994, the annualized return on the S&P/TSX Composite was +5.4%.  The annualized return on the MSCI Emerging Market Index was +7.4%, 2% PER YEAR more than Canadian stocks!  That period includes the significant drawdowns that occurred in the 1998 Asian currency crisis and the 2008 global financial crisis.  That 2% outperformance would be almost enough to make up for the average annual mutual fund fee in Canada.

So why don’t more clients have emerging markets exposure in their portfolios?  With the average Canadian focused on return you would think that the 2% return ‘bonus’ would be attractive.  The 1998 crisis likely spooked advisors that were considering using emerging markets or that already had it in the clients’ portfolios.  Then there was the 2001 tech meltdown and the 2008 financial crisis.  They likely decided to just stick with Canadian and US stocks because the evening news typically only includes those quotes in their ‘business’ report.

Emerging markets have historically been more volatile than US and Canadian stock markets.  From the 5 year period ending December 1998 to 2002, the MSCI Emerging Market Index had volatility about 5% higher than the S&P500 or S&P/TSX Composite.  From 2002 to 2008 that volatility gap shrunk a little before widening again following the 2008 financial crisis.  After the 2008 financial crisis rolled off the 5 year period, the volatility of the emerging markets index dropped to the same level as the S&P500.  So volatility shouldn’t be a reason to avoid emerging markets. 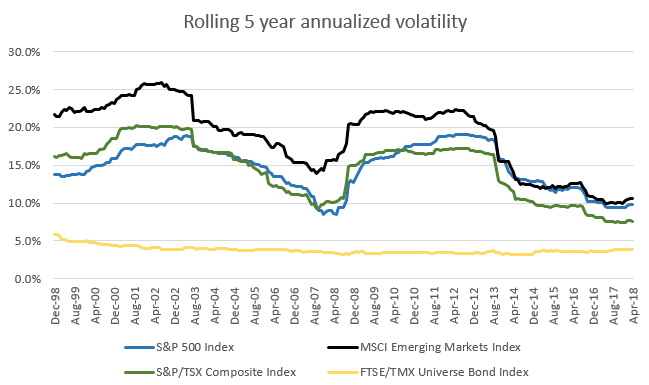 Another metric to consider is the valuation of the markets represented in your portfolio.  The US stock market remains the most expensive in the world on both an absolute basis and relative to its historical average.  If you believe in mean reversion, you would expect the valuation of the US stock markets to eventually return to their historical average, either by declining quickly or by posting flat returns for several years.  Emerging markets on the other hand, have valuations below their historical average, implying there is a lot more upside to its future returns than for US stocks. 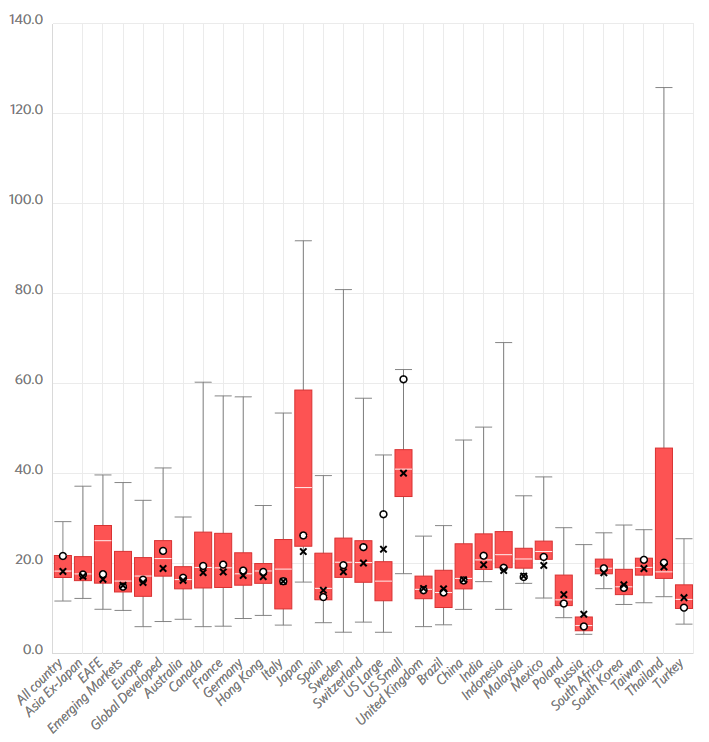 With US stocks having done well recently, many people have likely forgotten about the benefits of diversifying globally.  With the US president looking to implement more tariffs and other trade restrictions with countries around the world, the bloom is likely to come off US stocks.  Especially as more countries retaliate against the US.  Emerging markets have matured a lot since the 1998 Asian currency crisis and are a lot less dependent on the currency inflows and the US.  There are many positives to including emerging markets in your portfolio, hopefully more advisors and their clients will consider adding emerging markets to their portfolios.

The level of new housing starts declined -2.5% in March to 225K, while the value of building permits issued in February declined -2.6%.

The inflation rate for March was +0.3%, and +2.3% on an annual basis.  Core inflation which excludes more variable items such as gasoline, natural gas, fruit & vegetables and mortgage interest was+1.4%.

Canada’s GDP growth was +0.4% for February, led by a rebound in oil & gas and mining and manufacturing.  The Bank of Canada met on April 18, and as expected left the benchmark interest rate at +1.25%.