July was a quiet but positive month for most equity markets. The US Federal Reserve cut interest rates for the first time in over a decade which rattled markets at the end of the month. 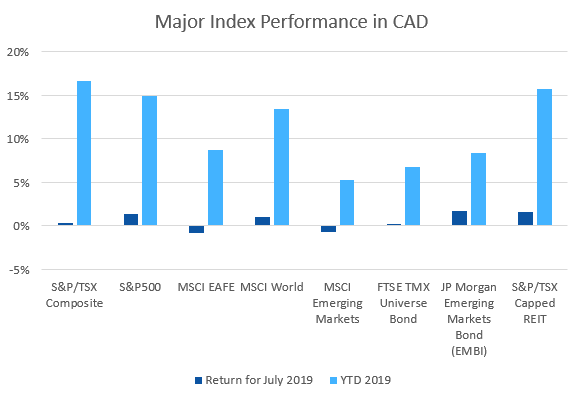 Canadian bonds were basically flat in July, the FTSE/TMX Universe Bond Index was up +0.2% and the FTSE/TMX Short-term Bond Index was down -0.02%.  They are up +6.7% and +2.7% for 2019, respectively.  US bonds performed better in July, particularly the lower rated and high yield indexes.

July was a month of historic events, especially at the end.

It had been ten and a half years since the U.S. Central Bank last cut their benchmark interest rate, the second longest streak on record. Experts disagreed on whether the rate should change. Interest rates were low and near zero. Unemployment was low and not weakening. Inflation was low though many expected it to go higher. Uncertainty was high due to daily skirmishes in the trade “talks” between China and the U.S.

By the time the Federal Reserve acted, the quarter point cut was widely expected but some said the cut should have been larger. Others said the rate should not have been cut at all. In the press conference after the announcement, even the Chairman of the Fed himself had a different tone from his tone in the announcement itself.

Coincidentally about one year before the end of July, after its rise from the brink of bankruptcy in the late 90’s, Apple became the first publicly listed company to reach a $1 trillion market value. Can a person know when a recovery from the brink of bankruptcy will happen?  A portfolio manager bought the stock nineteen years ago. It went down initially and then bounced around in a range. Almost three years after he bought it, his patience ran out and he sold it at a slight -5% loss. Should the portfolio manager have known?

Individual stocks can fly up and down a lot. Much of the time they lose a little or perform worse than the market. But a few pay off with a big return and are called “lottery stocks”. Poorly diversified portfolios can behave like this too.  How can a reasonable person expect to trade on news events or recoveries from bankruptcy?

Decades of evidence show that a broadly diversified, balanced portfolio based on sound evidence reduces the lottery risks of which events will move markets or which stocks will give a big payoff. Time and patience compound this portfolio result. 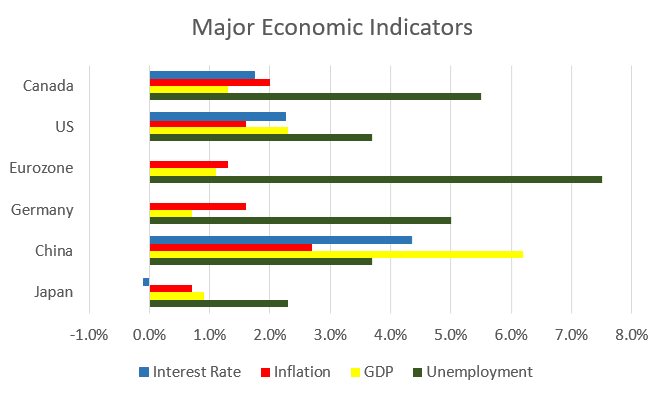 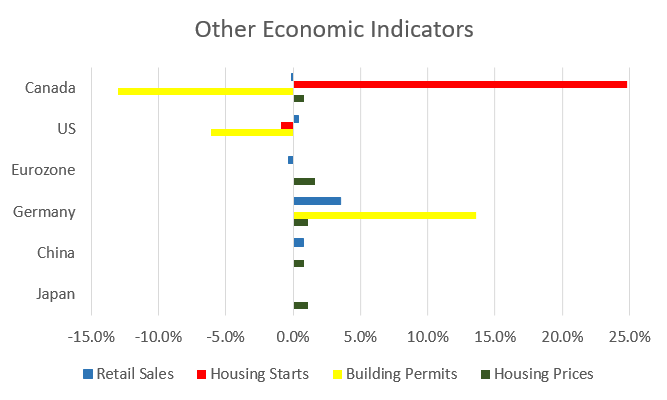 The inflation rate for June was -0.2%, and +2.0% on an annual basis.  Core inflation which excludes more variable items such as gasoline, natural gas, fruit & vegetables and mortgage interest was +2.0%.

As expected, the Bank of Canada left its benchmark interest rate unchanged at +1.75% at its July 10 meeting, as evidence is growing that trade tensions are having an effect on global economic activity.