February was a down month for nearly all equity market indexes as the corona virus continued to spread around the world. 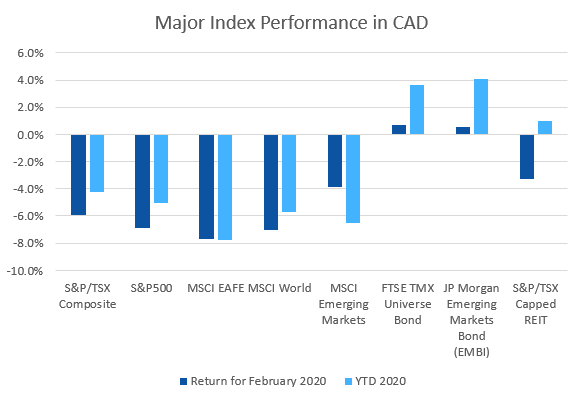 February was a negative month for nearly all equity market indexes, the only positive among those I track was the Nasdaq Biotech Index, and it was only up +0.3%.  The S&P/TSX Composite was down -5.9% for the month as the corona virus started to spread well beyond China.  In the US, the large cap S&P500 was down -8.2%.

EAFE (Europe, Australasia & Far East) stocks were down -8.3% for February, as were European stocks specifically.  British stocks fared a little worse at -9.7%.  Emerging market stocks fared better than most, and were only down -3.9% in February.

The headline commodities, oil and gold were both down in February.  Oil was again down double digits at -13.2%, while gold was down -1.0%.  The diversified Bloomberg Commodities Index was down -5.2% for the month.

Stock markets do not make a rational statement about our world. When they are functioning normally, they demonstrate a jumble of preferences and motivations from investors who are not always collaborating. Right now, markets are not functioning normally.

A good investment plan is more stable than trading prices in markets.

Markets will return to functioning reasonably well. All of history shows that a diversified portfolio built on good evidence withstands the stress and recovers. Long-term investors have lots of time to overcome losses and then to experience solid gains.

This example may help. If you go to a store to buy something, and find the store closed, this does not change your need for what you were going to buy. The fact that the store is not operating normally does not change demand for the item or its appropriate price.

Ticket scalpers offer another useful example. As the audience arrives to attend a performance, the scalper is selling tickets at a discount because he speculated that he could sell a certain number at a profit. His uncomfortable situation does not change the quality of the performance, or the pleasure of the audience who attends.

Global response to COVID-19 shows countries and people cooperating to an unusual extent. Because of how a virus spreads, this cooperation will make a big difference.

“We will ultimately overcome this period and return to a more stable environment but it’s imperative that we all do our part to shorten this period of anxiety by heeding the advice of our Government Health Agencies and the recommendations for best practices from the Company.

“We should all take comfort in knowing that the virus can be contained and normal day to day life can return in relatively short order as we are currently witnessing in China. It will require all of us to do our part so as to ensure the chain link connecting us is as strong as possible. In the meantime, our thoughts are with those who have been seriously impacted by COVID-19 and we are deeply grateful to the many health care workers on the frontline assisting those in need.” 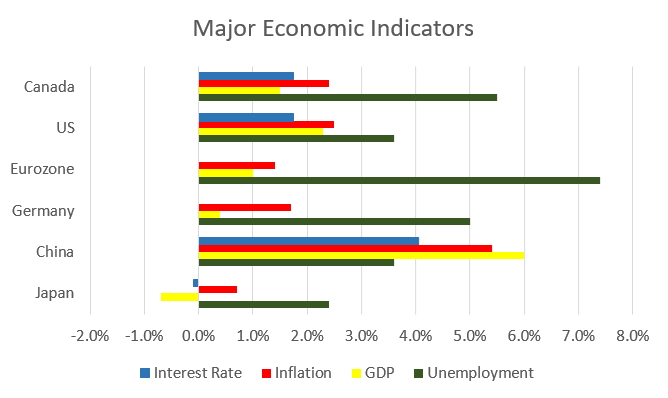 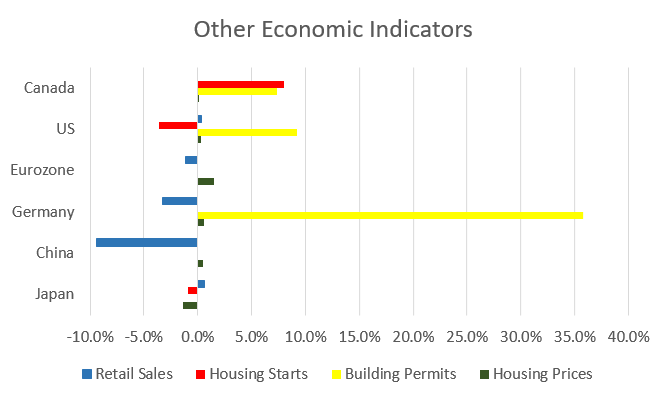 Canada’s unemployment rate fell slightly to 5.5% in January as 34,500 jobs were added, beating expectations of 15,000.  35,700 of those jobs were full time, while 1,200 part time jobs were lost.  Employment increased the most in Quebec while Alberta posted the largest job losses.

Housing prices across Canada were up +0.1% in January. Hamilton and Montreal were the top performers at +0.8% and +0.5%, respectively.  Quebec City was the worst performer at-1.4%, followed closely by Calgary at -1.1%.

The inflation rate for January was +0.3%, and +2.4% on an annual basis, an 8 month high.  Core inflation which excludes more variable items such as gasoline, natural gas, fruit & vegetables and mortgage interest was +1.8%.  The increase in the annual inflation rate was driven largely by a transportation costs, specifically an 11.2% rise in gasoline prices.

Canada’s GDP rose +0.3 in December, the strongest growth since May 2019.  Goods producing industries and the services sector both grew.  Transportation and warehousing rose +1.5%, and mining and resource extraction gained +1.3%.

As expected the Bank of Canada left its benchmark interest rate unchanged at their January 22 meeting.  No interest rate changes were expected, but as this was being written the BoC cut rates by 0.5% for the third time bringing the benchmark rate to 0.25% in an attempt to provide support in what is expected to be an historic decline in inflation rates and economic activity with the COVID-19 pandemic.